The Rivers State Police Command and its Bayelsa State counterpart have disagreed over which command should be held responsible for the theft of four bags of _garri_ (cassava flakes) by policemen attached to the Federal Special Anti-Robbery Squad.
The operatives were said to have snatched the goods from two traders in Mbiama Market on Tuesday and fled with them in a white Hilux van.
Mbiama is in the Ahoada West Local Government Area of Rivers State; a border town between the state and Bayelsa State.
A _Facebook _user, Mashak Uyi, had posted a picture of two FSARS operatives at the back of a Hilux van with the bags of _garri_. A woman and two men were seen running after the cops as their van zoomed off.
Uyi, who expressed shock over the conduct of the operatives, said the goods were snatched from the victims at gunpoint. He added that some soldiers at the scene laughed while the impunity went on. 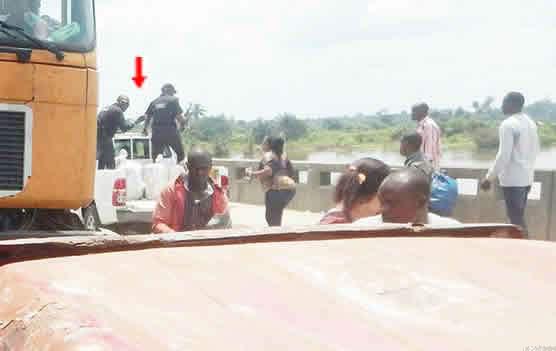