About to enter their fifth week on hunger strike, the 20 doctors at Warsaw’s Paediatric Hospital are losing hope that the government will agree to their demands for more government spending on the country’s health services.
They say healthcare is on its knees and they are being overworked.
Dr Piotr Matyja was one of the first doctors to join the protest. He was also among the longest lasting, giving up food for 12 days before being “disqualified” by fellow protesters on medical grounds.
Having regularly worked 80 hours a week he says: “I have seen from the front line what is happening to Poland’s health services. “Doctors want to care for their patients – but we are being met with a financial brick wall that is stopping us. Don’t Poles deserve a decent health service?”
Last year, the Polish government spent 4.4% of the country’s GDP on health services.
That puts it among some of the lowest-spending countries, according to the intergovernmental economic organisation OECD – just above Turkey (3.4%) and Latvia (3.2%).
UCJ, UNILORIN. 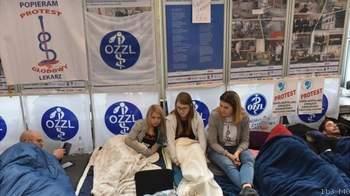