The voice of Pope Francis will be heard on the International Space Station when he makes a call to its astronauts.
The pope is due to speak to the crew at 1400 BST, including 60-year-old Italian Paolo Nespoli, who is on his third space mission. The video call will be streamed online on Nasa TV and the Vatican’s YouTube channel.
The ISS, which has been continuously occupied since 2000, is currently crewed by six astronauts. Alongside Nespoli there are three Americans and two Russians orbiting the Earth.
Francis is not the first pontiff to reach for the stars. His predecessor, Benedict XVI, called the ISS in 2011, when Nespoli was also part of the crew.
Francis has been an outspoken critic of humans’ effect on the environment, writing in a 2015 encyclical: “The Earth, our home, is beginning to look like an immense pile of filth. 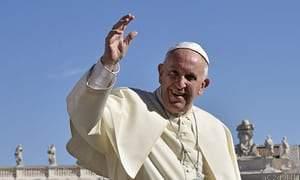