A powerful 7.3 magnitude earthquake that struck the Iraq-Iran border region killed over 330 people in both countries, sent people fleeing their homes into the night and was felt as far west as the Mediterranean coast, authorities reported on Monday.

Iran’s western Kermanshah province bore the brunt of the temblor, with Iran’s state-run news agency reporting the quake killed 328 people in the country. State television said some 3,950 were injured.
The area is a rural, mountainous region where residents rely mainly on farming to make a living. In Iraq, the earthquake killed at least seven people and injured 535 there, all in the country’s northern, semiautonomous Kurdish region, according to Iraq’s interior ministry.

The magnitude 7.3 quake was centered 19 miles (31 kilometers) outside the eastern Iraqi city of Halabja, according to the most recent measurements from the US Geological Survey. It struck at a depth of 23.2 kilometers (14.4 miles), a shallow depth that can have broader damage. Magnitude 7 earthquakes on their own are capable of widespread, heavy damage. 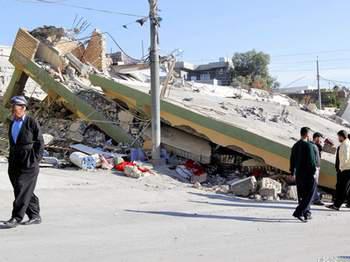