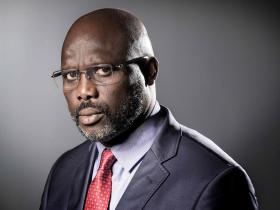 Liberia’s new President George Weah delivered his first State of Nation address earlier today in the presence of his countrymen. He began the speech by thanking god for his support and stressed on the historic election, its significance in Liberia’s history and the peaceful transition of government.

He stated that the Liberian Constitution will be his guiding light for the duration of his leadership and governance and requests the public to be aware and more familiar with its principles. He also quoted from Articles 4-10 of the constitution.

“Total revenues collected in calendar year 2017 amounted to 489.1 million US Dollars, which is a 13 percent decline over revenue collected in 2016, which was 565.1 million… it is possible to inform you that the state of the economy that my administration has inherited, leaves a lot to be desired. This is plain for all to see, for we are all affected by it. Our economy is broken, our government is broke, our currency is in free-fall, inflation is rising, unemployment is at an unprecedented high, and our foreign reserves are at an all-time low,” he stated.

He stressed that the executive must work with the legislature (the people) to help sort out the challenges that now plague Liberia. “We shall focus on reviews and revision of our education system, improve health and sanitation, promote and strengthen gender equality, and provide for youth re-orientation and empowerment through training of all kinds, the creation of jobs, and the expansion of sports,” the President reiterated, presenting a larger picture of the problems that need solving. The President also mapped out other areas that needed help – economy, security and justice and transparent governance.

Weah then proceeded to detail his immediate agenda, which is looking at laws that are serious impediments to the country’s growth – limitation of citizenship to black people only, restriction of land ownership to citizens and dual citizenship.

“….As freed slaves, (the founders) were fleeing from the oppressive yoke of slavery imposed upon them by white slave owners. They therefore wanted Liberia to be “…a refuge and a haven for freed men of color”, and so they restricted citizenship only to black people. Here in the 21st century, I am of the view that these threats no longer exist, and that these conditions have changed. In these circumstances, it is my view that keeping such a clause in our constitution is unnecessary, racist, and inappropriate for the place that Liberia occupies today in the comity of nations. It also contradicts the very definition of Liberia, which is derived from the Latin word “liber,” Meaning “Liberty.”” he said about citizenship, also adding “I believe that most Liberians who are also citizens of another country probably acquired the additional nationality as a means to escape from the terrible atrocities, which characterized our civil conflict, and for economic survival in their new countries of residence. And if conditions now exist in Liberia that make them want to return home and contribute their quota to the development of our common patrimony, then I do not think that it is fair to treat them as non-citizens in the land of their birth,” about dual citizenship.

The President also promised to slash his salary and benefits by 25% and give the proceeds to the Consolidated Fund for allocation and appropriation. As a closing comment, he said, “Let us all exert our best effort to ensure that, in the cause of the people, the struggle must end!”