Information provided by the CIA helped Russian security services foil an attack on St Petersburg’s Kazan cathedral, US and Russian leaders say.
President Vladimir Putin phoned Donald Trump to thank him for the information, the White House and Kremlin confirmed.
The attack was allegedly planned to take place on Saturday. Russia’s FSB security service said in a statement on Friday that it had detained 7⃣ members of a cell of Islamic State supporters and seized a significant amount of explosives, weapons and extremist literature.
The cell was planning to carry out a suicide attack at a religious institution and kill citizens on Saturday and the group was preparing explosions targeting the cathedral and other public places in Russia’s second city, the Kremlin statement said on Sunday.
Mr Putin told Mr Trump that Russia’s special services would hand over information on terror threats to their 🇺🇸US counterparts and had asked the US president to pass on his thanks to the CIA director and the operatives involved. 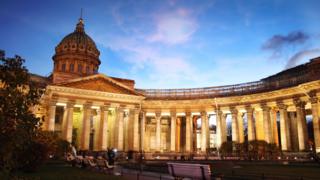