CAUSES OR MODES OF TRANSMISSION OF HERPES
Herpes simplex viruses have worldwide distribution and are found in the most remote human populations. (Mertz KJ, LevineWC, etal 1998).
Worldwide rates of either HSV-1 or HSV-2 are between 60 and 95% in adults. HSV-1 is more common than HSV-2, with rates increasing as people age. (Chayavichitsilp P, Buckwalter JV, Krakowski AC, etal  Supra).
HSV-1 rates are between 70% and 80% in populations of low socioeconomic status and 40% to 60% in populations of improved socioeconomic status. (Looker KJ, Garnett GP, Schmid GP, 2008).
Prevalence of HSV-2 in those between the ages of 15 and 50 is about 535 million as of 2003 or 16% of the population, with highest rates in sub-Sahara Africa and lowest in Western Europe, and with greater rates among women and those in the developing world. (Looker KJ, Garnett GP, Schmid GP, Supra).
In the U.S, 57.7% of the population is infected with HVS- 1 and 16.2 % are infected with HVS-2, and prevalence of HVS-2 was 39.2% in blacks and 20.9 % in women. (Xu Fujie, Fujie Xu, Maya R, etal. 2006).
The Herpes Simplex Virus otherwise known as HSV is an infection that causes herpes. Herpes is caused by two different but closely related viruses, leading to two distinct infections. They are HSV-1 and HSV-2. (Healthline Newsletter 2017). Like every other viruses, herpes can also be transmitted through various ways.  The discussion will be divided into two with causes and modes of transmission of both HSV-1 and HSV-2 discussed separately.
CAUSES OF HSV-1
HSV-1 generally is the type that causes cold sores or fever blisters around the mouth of the infected person. (Mayoclinic 2017). Modes of transmission include:
1.Eating from same utensils with an infected person
2.Sharing lip balm with an infected person
3.Kissing an infected person
HSV-2 is the type that commonly causes genital herpes. It is very common and highly contagious. It spreads through the following ways:
1.Direct contact with an infected person: When HSV is present on the surface of the sin of an infected person, it can easily be passed on to someone else through the moist of the skin, as well as the eyes. (Medical News Today 2017).
2.Sexual Contact with an infected person
It must however be noted that a human cannot be infected with HSV by mere touching an object, work surface, washbasin, or towel that has been touched by an infected person. (Medical News Today Supra).
Written by Rtr. Oke Ridwan O
REFERENCES
1.Mertz KJ,TreesD,LevineWC,etal.Etiology of genital ulcers and prevalence of human immunodeficiency virus coinfection in 10 US cities. The Genital Ulcer Disease Surveillance Group.J Infect Dis.1998;178:1795-98.
2. ChayavichitsilpP,BuckwalterJV,KrakowskiAC,etal.Herpessimplex.PediatrRev.2009;30(4):119-29.
3.Looker KJ, Garnett GP, Schmid GP. An estimate of the global prevalence and incidence of herpes simplex virus type 2 infection. Retrieved from {http:// ncbi. nlm. nih.gov/ pmc/articles/PMC2649511). Bulletin of the World Health Organization. 2008; 86(10):805-12,A.
4.Xu Fujie,FujieXu.MayaR,etal.Trends in Herpes simplex Virus Type 1 and Type 2 Seroprevalence in the United States.JAMA.2006;296(8):964-73.
5.https//www.heathline.com/health/herpes-simplex#causes.Accessed/29-12-2017@ 9:45pm
6.https//www.Mayoclinic.org/diseases-conditions/genital-herpes/symptoms-causes/syc-20356161.  Accessed/29-12-2017 @ 9:50pm
7.https://www.medicalnewstoday.com/articles/151739.php.Accessed/29-12-2017@ 9:50pm
For questions, enquiries, feedback, you may reach us through any of the following medium;
Akinyemi Muhammed A,
Chairman, E-Project Committee,
RAC UNILORIN.
08177522712
Atanda Abdullahi Adekunle
Project Service Director,
RAC UNILORIN.
07033803084
Ismaheel Waliulah Abodunrin,
President,
RAC UNILORIN
08063041480
📧 : racunilorin001@gmail.com
Facebook: https://m.facebook.com/racunilorin
Instagram: @rac_unilorin
Twitter: @rac_unilorin 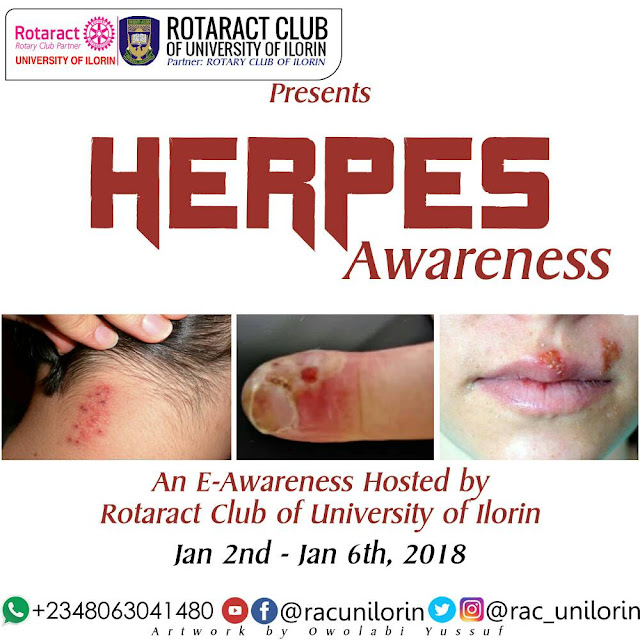