The “Better by Far” University has held her annual orientation programme for the newly admitted 2018/2019 students, March 1, 2018 at the University Auditorium, University of Ilorin.
The event featured different dignitaries of the University as they gave speeches that focused on the University’s ethics.
The Vice Chancellor, Prof. Sulyman Age Abdulkareem, represented by Dean of Student Affairs; Prof. L.T Ajibade gave his welcome speech titled “Conquering your World”. The VC welcomed all students as he assures them that they would “get all they came for”.
He expressed his joy towards the event as it was the first of its kind since he became the Vice Chancellor. The newly admitted students tagged as ‘The lucky ones,’ were obliged to take advantage of the numerous available resources.
The Dean of Students Affairs went on to remind the students that they could only graduate if they were found worthy in ‘learning and character’ as the University has zero tolerance for unacceptable behaviors on campus. These unacceptable behaviors were listed as indecent dressing, sexual harassment, inducement for favor, drug abuse, prostitution, joining unregistered clubs and fighting. The Dean concluded by giving his number to the students and hoped that in the next 4 or 5 years they would say they “I came, saw and conquered”.
The Registrar of the University; E.J Obafemi, represented by the Deputy Registrar; gave his speech on “remember the children of who you are” immediately after the welcome speech. He began by welcoming all students and reminding them that orientation was meant to inform and familiarize them with the university. He gave a brief history of the University and urges them to count themselves worthy of being a part.
He pleaded that students manage their time thereby not loosing focus on their education. The speaker urged that they should acquaint themselves with the official website by reading school news and to socialize themselves with sports, quiz and other activities as one cannot “be a scholar by being just a bookworm,” he added.
The students were however told to shun all bad behaviors. He concluded by assuring the students that their relationship with Unilorin is a long life one.
The Student Union President; Adebisi Ridwan, represented by the Vice President; Aremu Aishat, welcomed the students to “better by far” school.
Harmony disclosed that the newly admitted students were in an institution that: supported the Union’s administration, has quality infrastructure, has hard bunking and brilliant students, focuses on making students better as well as inspiring minds. She went further by urging them to make a plan for themselves as they have an opportunity to learn new things and acquire new skills that would forever be with them.
The Chief Imam of the school Mosque and the Reverend of the school Chapel were present at the orientation.
The Chief Imam, represented by his Deputy; Prof Abdulsalaam, spoke on ‘Academic Excellence and Religious Harmony’. He focused majorly on religious harmony, reminding the students that religion has a role to play in their life.
He reminded that, humans emanated from Adam, however “we are brothers and sisters- we should live in hamony”. The Deputy Chief Imam discussed the causes of religious harmony and urged students to avoid them but attach themselves to their church or mosque as the case may be.
He summarized his speech with the motion that “University of Ilorin is not a religious-based University” as it is interrelated religiously. He pleaded that the students should embrace tolerance it is “the road to world peace”. He concludes by praying that the students would end well.
Rev. Dr. C.O Ogunkunle of the University Chapel commended the Imam’s speech and ended by reminding that the students’ purpose in school is academic excellence. He discussed academic excellence as requiring dedication, determination, initiative, creativity, diligence and gave examples of biblical persons who upheld excellence. He also reminds that Unilorin emphasizes on religion and students should promote religious harmony in their hearts and deeds.
The Doctor-in-Charge of the school clinic; Dr R.A Odunola was invited to address the students on health matters.
He informed students that there are available medical services for them even as they have not registered but urges them to register when due because of its advantages. He cited examples of medical cases of students and pleaded that students should abstain from drugs and risks.
The orientation also had the sub-dean of Student Affairs; Dr. Akanmu, the Electronic Librarian; Comrade Mrs. Adesina, the DPO of Tanke and other officials speaking on various matters. The event was also well attended by students from different Faculties. Some students were amused at the new things they learnt about the school.
A student from the Department of Religion when asked what her response was to the event said, “The orientation is cool and okay, I pray for God to help me follow the rules and regulations I learnt”. Some others were not satisfied with the event as they expected more. Tim, from Department of History and International Relations opined that “it is disorganized because we are many and so many people are standing, it should be done faculty by faculty and not set of faculties”. 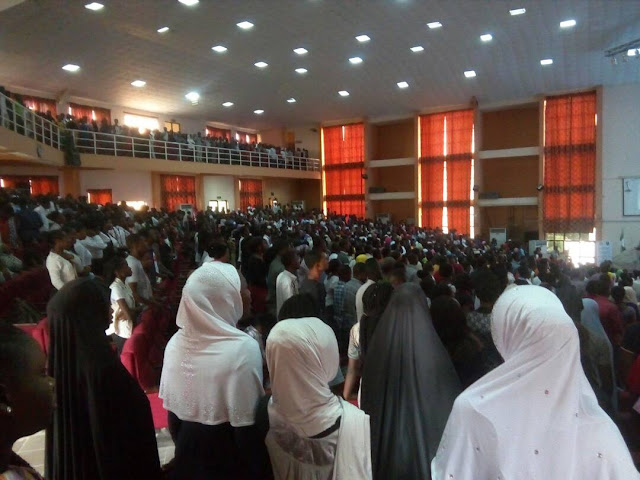