Nicholas Negroponte, Greek American architect, founder and Chairman Emeritus of Massachusetts Institute of Technology’s Media Lab, was caught saying; computing is not about computers anymore. It is about living. This by extension is to say that the things we do, our daily activities, our actions and inactions are basically affixed to computing. Computers, since their proper introduction in the 19th century by Charles Babbage, have been a very controversial lot. Many have seen them as an aid and some, a cancer. Some believe computers, and by extension, machines and robotics, are an end to menial labours which sustain the less-privileged members of the society. Machines, Robots, and Computers {MRCs} keep getting sophisticated by the day. The more of them there are, the lesser the humans needed for the tasks which they perform.

Many people believe, that if MRCs keep going at the rate which they’re presently, eventually there will be little or no jobs for humans to do. Basically, the jobs MRCs do are ones that seemingly relate to repetitive tasks, as they do not have the intelligence to execute more than they’ve been programmed to do. Ordinarily, it is the factory worker who lifts cartons all day that should be worried with the introduction of a mini crane, but this job susceptibility is not limited to people with low income jobs alone. High end jobs that come with predictability are also at risk of being lost to MRCs. Lawyers who run around the world, importing arguments and making commercial agreements have been challenged by The LawGeex, a mechanized Artificial Intelligence (AI) that can take a new contract, one that it’s never seen before, read it and then compare it to a database of every similar contract that it’s seen in the past, wrote, Dan Mangan of CNBC.

Even much smaller operations that give occupations to persons have been hijacked by MRCs. Recently I came across a broadcast on Whatsapp which read;

“Please!!!
Stop buying airtime from banks.
Buy from hawkers (those who sell on the road or around your home areas), because our brothers/sisters are becoming jobless.
Buy from people not machine, please!
So that they will earn a living!
Save our people from loosing their small businesses
-Sad but true.
Please spread it!”

This is the extent at which MRCs have been denying people of a source of living. But is that just it? Is that all they do? These Machines, these Robots, these Computers, with their ever expanding AIs, are they just here to take jobs?

On Thursday 7th September 2017, I was privileged to be at the Nigerian tribune HQ in Ibadan, on an excursion. In the big firm was a big engine room where papers are processed for print. I was fascinated by how enormous the machines in it are. Then I started to wonder how many people it would take to operate these things. How much work can it do in place of humans? How effective are the output of these machines? I was soon put out of my mystery by one of the specialists who handled operations. The machines have the capacity to produce 20,000 copies of newspapers per hour, with 5 personnel working on them during any shift. Just five people with huge machines, and 20,000 papers would be ready to be read in an hour. The man further went ahead to talk about how the machines have evolved over time, from being able to do simple tasks to being able to do more complex ones; from lapses in security mechanisms to advances in security mechanisms.

Prior to this time, do you want to imagine how many persons it would take to produce 20,000 papers? What about the efforts and the financial losses that would be incurred? Can one say the human mind which keeps accumulating more information by the day will be as accurate as any MRC that was programme for that simple specific purpose?

As much as I want to agree that MRCs are taking people out of jobs, I want to honestly believe MRCs do better. I believe strongly that consequences are bound to arise, but aren’t these consequences minimal compared to losses to be suffered owning to human errors, mistakes and faults? What about the long term financial consequences. You may want to argue that saving money to get a robot that can do the job of ten men is unfair, but I’ll rather advise those ten men to educate themselves on how to be controllers of some of these MRCs. On things as basic as recharge card selling? What technology intends is to bring as much ease and facilitation as it can to the human race. Isn’t it much more comfortable to recharge from my bed than it is walking ten, twenty, thirty minutes to make these recharges? Eventually these things become necessary. What about the other benefits like keeping a clean environment? Recharging from an e-bot would not have me throwing papers all over, another long term hazard to the atmosphere. So would you rather not allow me save us?

In the end, one can only try to make arguments favourable to one’s disposition, but no one knows paradoxically what will happen in the end. Are Machines, Robots, and computers out here to bring relief to us in the execution of our jobs, or to ‘relieve’ us of them? Maybe someday, even your favourite writer will no longer be needed when there are MRCs that can do his job, or maybe it will only encourage them to be more human and be dynamic in their arts. Maybe these MRCs are here to make or to mar us. Maybe some of us in this generation will never know what the long term effect of these MRCs will be. 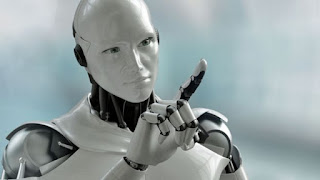 As a person, I would rather support the efficiency and comfort which comes with these ‘things,’ would you?