The US has sanctioned a Myanmar general accused of leading an ethnic cleansing campaign against the Rohingya people.
The exodus began earlier this year when Myanmar’s army launched a counter-insurgency operation in northern Rakhine state after militants attacked police posts and killed members of the security forces.
Many who reached Bangladesh – some with bullet or other wounds – said Burmese troops backed by local Buddhist mobs had burned their villages and attacked and killed civilians.
In its statement, the US Treasury said Maung Maung Soe “oversaw the military operation in Burma’s Rakhine State responsible for widespread human rights abuse against Rohingya civilians”. 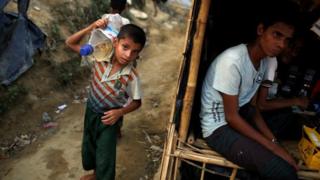