After particularly dry summers, the Spanish town of Mansilla de la Sierra reemerges from its watery depths. Currently, the reservoir that now sits in its place is filled to only 15 percent of its capacity.
The region’s drought has revealed structures that have only rarely been seen over the past half a century.
During the early 20th century, the small town in the northern Spanish province of La Rioja was home to roughly 600 people. In 1959, the local government moved to capitalize on the region’s three fast-flowing rivers, and by 1960 those 600 inhabitants were forced out.
The dam’s construction promised to bring hydroelectric power to the agriculture-based region, and a reservoir was built in Mansilla de la Sierra to control the powerful flow of water that irrigated crops and provided electricity.
Abandoned structures can still be seen when the reservoir waters recede. The ruins look like an eerie ghost town with crumbling brick buildings.
In addition to homes, children’s playgrounds, churches, and bridges emerge when the reservoir water recedes. 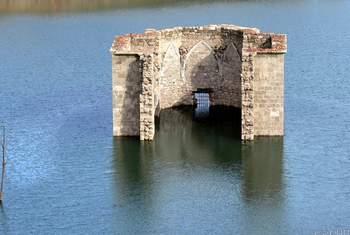