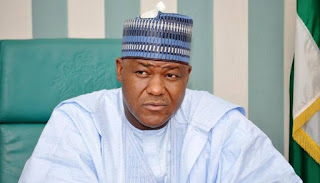 Speaker of the House of Representatives, Yakubu Dogara, has explained how Senate President Bukola Saraki helped him to become speaker in June, 2015.

Both Saraki and Dogara emerged as leaders of the National Assembly against the wish of their party, the All Progressives Congress (APC) in keenly contested elections. They defeated Sen. Ahmad Lawan and Rep. Femi Gbajabiamila respectively, who were the party’s choice.

Recounting how he emerged speaker, Dogara said, during a book launch to mark his 50th birthday in Abuja on Tuesday, that Saraki was key to his victory as the Senate President and donated both ideas and money to him.

“The story of my emergence as speaker is a story of national consensus. It’s a meeting of people across board. My brothers and sisters sat in the National Assembly and said ‘look, we’ll make you speaker’.

“Members made me speaker against all odds. I’m sorry I have to remind us of this. Virtually everything was done against the project. From the party to even resources at our disposal,” he said.

“I know I’ve not said this before, but the Senate president played a key role. Whenever we ran into trouble during the campaigns, we would go to him. He contributed a lot of ideas and even money, although I’m not going to mention how much,” he added.

“My victory reassured my faith in project Nigeria. That made me to say everything is possible in this country,” Dogara said.

Speaking on how to move the country forward, Dogara said Nigeria must invest heavily on education to have the right kind of leaders that would take the country to the desired destination.

“If we want to have the right kind of leaders, we must invest in education. In other countries, they have Ivy League universities that train their leaders. In Africa and Nigeria, we must also do that,” he said.

The speaker said he has chosen to celebrate his 50th birthday for the first time in his life in order to review his journey in life and make an impact in the lives of others, especially people like internally displaced persons (IDPs) and the less-privileged.