Saudi Arabia will allow women to attend sports events in stadiums for the first time from next year, officials say.
Families will be able to enter the stadiums in three major cities – Riyadh, Jeddah and Dammam.
It is another move towards giving more freedom to Saudi women, who face strict gender segregation rules, and follows the historic lifting of a driving ban.
Crown Prince Mohammed bin Salman is leading a major drive to modernise Saudi society and boost the economy.
Saudi Arabia’s sports authority said that preparations would start in the three stadiums so they can be “ready to accommodate families from early 2018”.
Restaurants, cafes and monitor screens would be set up inside the stadiums as part of the changes, it added. Up until now, the venues have been men-only areas.
UCJ, UNILORIN. 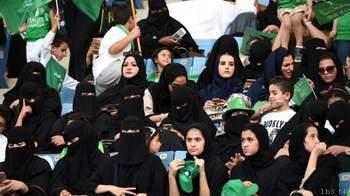