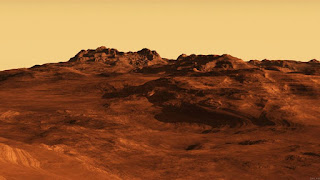 The Martian surface may have reacted with and absorbed the water that once flowed on the red planet, making it uninhabitable, scientists suggest. Although today’s Martian surface is barren, frozen and uninhabitable, a trail of evidence points to a once warmer, wetter planet, where water flowed freely. The conundrum of what happened to this water is long-standing and unsolved.

Convinced that the planet’s mineralogy held the answer to this puzzling question, scientists from the Oxford University in the UK applied modelling methods used to understand the composition of Earth rocks to calculate how much water could be removed from the Martian surface through reactions with rocks.

“On Mars, water reacting with the freshly erupted lavas’ that form its basaltic crust, resulted in a sponge-like effect,” he said. “The planet’s water then reacted with the rocks to form a variety of water-bearing minerals. This water-rock reaction changed the rock mineralogy and caused the planetary surface to dry and become inhospitable to life,” he added.