Since the discovery of dark streaks on the slopes of Mars in 2011, astronomers have been excited about potential evidence of water beneath the surface of the red planet.
If there are subsurface water flows on Mars, they could allow life — even on a microbial level — to exist as well. But further study of these recurring slope lineae, known as RSL, is revealing something else.
Those dark streaks may be the result of granular flows like sand and dust, according to a study published Monday in the journal Nature Geoscience. The study is the product of a research team made up of representatives from the US Geological Survey, the Planetary Science Institute, the University of Arizona and Durham University in England.
The study is based on observations made with the High Resolution Imaging Science Experiment camera on the Mars Reconnaissance Orbiter.
The RSL have been perplexing scientists since their discovery. Thousands recur during the warmest season on Mars each year, growing longer and darker until they fade in winter. They’re found on steep, rocky slopes on the darkest areas of Mars: the equator, the northern plains, the southern mid-latitudes.
Their seasonal appearance looked like seeping water. But how would water form only at the tops of such steep slopes — steeper than 27 degrees? Scientists were puzzled. 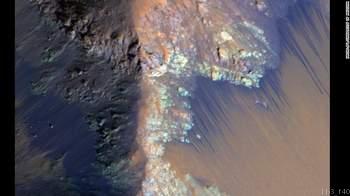