The rainforests of Indonesia and Malaysia have for long had enigmatic residents in their tree canopies.
These are the orangutans — with shocks of orange fur and remarkable vocal abilities — who share in common 97% of their DNA with humans.
The two distinct species of the primates living on the islands of Borneo and Sumatra, are surviving members of the family of six species of great apes: Eastern and Western African gorillas and chimpanzees and bonobos.
But new research, some two decades in the making, is now upsetting this conventional scientific wisdom and suggesting that there is a seventh great ape species: the Tapanuli orangutan, from upland forests on Indonesia’s island of Sumatra.
An international team of scientists announced their findings in a paper published on Thursday in _Current Biology_ .
The new species, Pongo tapanuliensis, or the Tapanuli orangutan, was described as living in an area of forest about 680 sq.km.
The team researching the Tapanuli orangutan contends that it’s the most endangered of all surviving great apes, with only about 800 left. 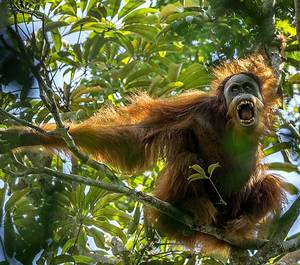