Strange seasonal patterns on the surface of Mars are made by freezing and melting of gas, not water, a new study has found.
The Red Planet has gullies that appear and then disappear on its sand dunes – much like how water forms them on Earth.
But it is not water but rather carbon dioxide (CO2) sublimation, the process by which a substance changes from a solid to a gas without an intermediate liquid phase, which is responsible.
And it happens during Mars’ winters, which are cold enough to freeze gas into blocks which then gouges out the patterns in the sand. Then, as Spring comes, the block “melts.”
It is a phenomenon unlike anything is seen on Earth, the study by Trinity College Dublin and Durham University said: “Mars’ atmosphere is composed of over 95% CO 2 , yet we know little about how it interacts with the surface of the planet.
Mars has seasons, just like Earth, which means that in winter, a lot of the CO 2 in the atmosphere changes state from a gas to a solid and is deposited onto the surface in that form.” 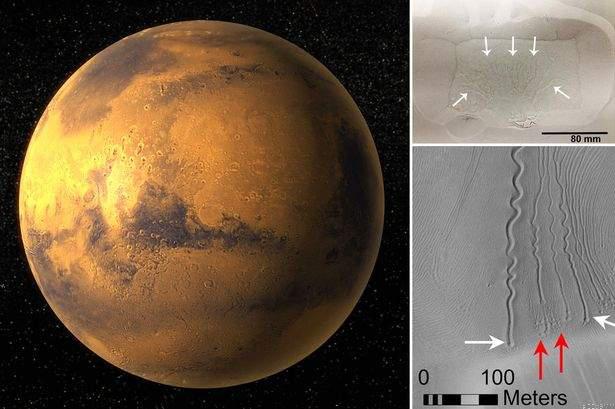