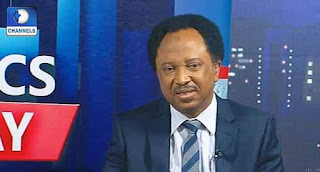 The All Progressives Congress (APC) lawmaker also reacting to the demolition of APC faction secretariat, a building belonging to Senator Suleiman Hunkuyi, in Kaduna State, said El-Rufai is only angered by his suspension.

As an aftermath of crisis rocking, APC in Kaduna State saw the emergence of a faction formed by members loyal to the two suspended APC Senators Suleiman Hunkuyi and Shehu Sani in the state. The new faction opened a new State party Secretariat at 11B Sambo close in the state but the building housing the secretariat was demolished on Tuesday, February 20.

“What is happening in Kaduna is simply tyranny. We don’t have an elected governor we have a military administrator, one who thinks that everything should go his own way. He engineered the party to suspend us, to suspend me. That is about a year and half ago. When the suspension (El-Rufai’s suspension) came, he became very angry moving about bulldozers to bring down buildings,” he said.