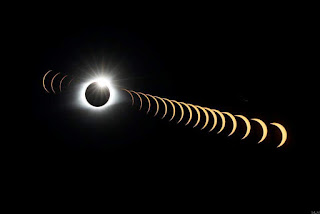 The Great American Eclipse of August 2017 left a ‘wake’ in the Earth’s upper atmosphere, the way a ship does when it moves through water. The phenomenon has been theorized about, but never before detected, according to Gizmodo.

A collaboration between researchers at the Massachusetts Institute of Technology’s Haystack Observatory and researchers at the University of Tromsø in Norway revealed the waves in our planet’s ionosphere, the ionizing section of its upper atmosphere.

The researchers tracked the waves using satellite data from 2,000 sensors placed at different locations across the United States, according to Gizmodo. A paper describing the work as “the first unambiguous evidence” of atmospheric bow waves was published in the scientific journal _Geophysical Research Letters_.

When the Earth’s moon passes in front of the Sun, it temporarily blocks not only the light we receive from the Sun but also the heat.

The shadowed zone, as Gizmodo explained, sees a marked drop in heat energy, and because that zone isn’t a single static location, but moves along as the moon does, it creates a bow wave effect as it travels; a ripple of contrasting, decreased heat energy moving across the atmosphere.