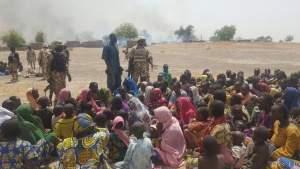 Two women of the 700 persons rescued from Boko Haram insurgents have given birth at a military holding facility in Monguno Local Government Area of Borno State.

The Deputy Director, Army Public Relations, 8 Division, Col. Timothy Antigha, disclosed in a statement issued in Maiduguri. Antigha said that over 700 persons abducted by Boko Haram insurgents had escaped from their captors and received by the 242 Battalion, Monguno.

He said the abductees including males, females and children were forced to work as farm labourers by the insurgents. He said that two women among the freed persons safely delivered babies while at the facility.

The army spokesman added that the intensified onslaught against the insurgents under Operation Deep Punch II had weakened and decimated their positions, which enabled the persons to escape. “Over 700 farmers, fishermen and members of their families hitherto held by Boko Haram terrorists as farm workers have fled the various islands in Lake Chad to Monguno.