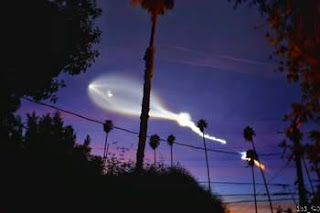 SpaceX’s launch of a Falcon 9 rocket Friday night (Dec. 22) was by all accounts a dazzling sight (and for some, an unsettling one) in the night sky and the photos are simply spectacular.

The launch, which lifted off from Vandenberg Air Force Base in California, north of Los Angeles, carried 10 Iridium Next communications satellites into orbit just after sunset, leaving a vast glowing plume in its wake as it soared into space on a southward trajectory.

That glowing cloud sparked thoughts of UFOs for some observers, which they shared on Twitter (SpaceX CEO Elon Musk made a UFO joke, too), and the Los Angeles Fire Department even issued a statement alerting the public that the “mysterious light in the sky”‘ was just a SpaceX rocket launch.