Two senior figures in the sacked Catalan separatist government must stay in jail but six others can go free, a Spanish supreme court judge has ruled.
The six set to leave Spanish jails must post bail of €100,000 (£88,000; $120,000) each. Two top activists must also remain in jail. The separatists were remanded in custody last month. Catalan ex-President Carles Puigdemont fled to Belgium. All are accused of sedition.
Spain feared the others could flee too. The ruling came a day before the start of campaigning for the 21 December Catalan regional election.The judge in Madrid ruled that Mr Puigdemont’s deputy Oriol Junqueras and Catalan ex-Interior Minister Joaquim Forn must stay in jail, along with grassroots separatist leaders Jordi Sanchez and Jordi Cuixart.
The eight politicians are accused of rebellion and sedition over the region’s illegal declaration of independence in October. A new opinion poll suggests that pro-independence parties will fall narrowly short of an absolute majority in the December election. It was conducted by the Spanish Centre for Sociological Research (CIS) among Catalan voters in late November. 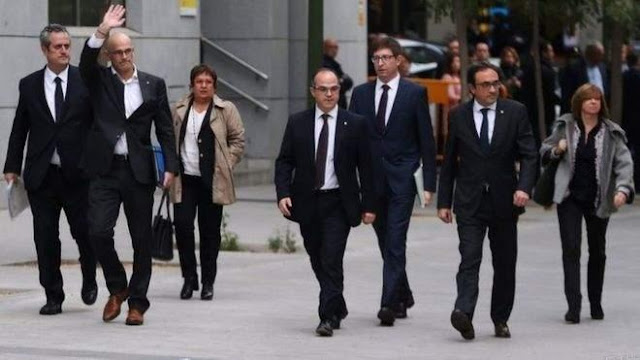