Anyone in the world can now download and read the doctoral thesis of a 24-year-old Cambridge postgraduate student, written in 1966; how many will fully understand Properties of Expanding Universes is another matter.
Stephen Hawking hopes that giving free access to his early work will inspire others, not just to think and learn but to share research. He said: “By making my PhD thesis open access, I hope to inspire people around the world to look up at the stars and not down at their feet; to wonder about our place in the universe and to try and make sense of the cosmos.
Cambridge University, which calls the thesis “historic and compelling”, says it is already the most-requested item in its open access repository, Apollo. “In just the past few months, the university has received hundreds of requests from readers wishing to download Prof Hawking’s thesis in full.”
The work considers implications and consequences of the expansion of the universe, and its conclusions include that galaxies cannot be formed through the growth of perturbations that were initially small.. 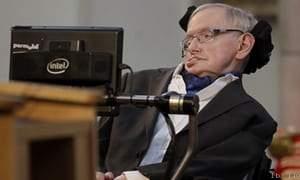