Moored ships were blown away as a “supercell thunderstorm” swept through South Africa’s KwaZulu-Natal region, killing at least eight people. The dead include a child swept away by rising waters and two patients killed when a wall collapsed at the Prince Mshiyeni Memorial Hospital, near Durban, the region’s main city.
KwaZulu-Natal and other parts of the country were hit by a “supercell thunderstorm”, the South African Weather Service said. Such storms are characterised by a persistently rotating updraft like a tornado. “Satellite pictures show lightning over the sea and it seems to be moving off the coastline,” Weather Service spokesman Hannelee Doubell was quoted by South Africa’s TimesLive news site as saying.
The storm forced the closure of the Port of Durban, one of the busiest in Africa, on Tuesday. Three vessels were grounded while others broke mooring lines and drifted in the channel, the port authority said in a statement. 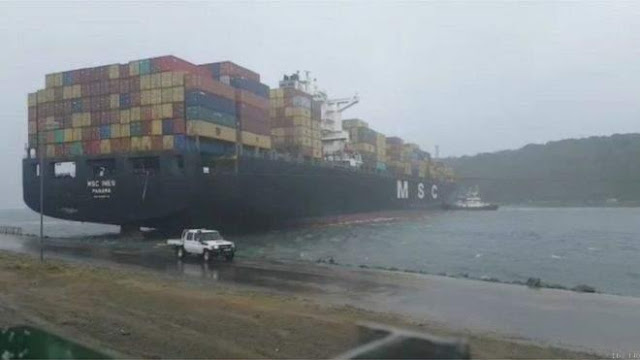