A rainbow may be a wondrous sight but for most people it’s also a fairly fleeting one. But last week, professors and students of the Chinese Culture University in Taipei’s mountains were treated to one that lasted for nine hours.
“It was amazing… It felt like a gift from the sky… It’s so rare!” said Chou Kun-hsuan, a professor in the university’s Department of Atmospheric Sciences.
Prof Chou and a second professor, Liu Ching-huang, led the efforts to document the rainbow with the help of the department’s students and the campus community. Their observations, pictures and video recordings showed the rainbow lasted from 06:57 until 15:55 – eight hours and 58 minutes. 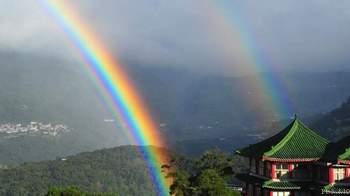