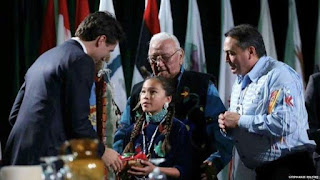 A year ago, Autumn found herself face-to-face with Justin Trudeau at the Assembly of First Nations’ annual winter meeting.

She had been chosen to present the Canadian prime minister with a ceremonial copper water bowl to symbolise his responsibility to protect the country’s water.

But instead of being star struck, the teenager spoke her mind.

“I am very unhappy with the choices you’ve made,” she said.

As prime minister, Mr Trudeau has supported a number of pipeline projects, drawing sharp criticism from indigenous and environmental advocates.

There are also 100 First Nations communities in the country that have had a water advisory in place for more than a year, a national crisis that the government has promised to fix by 2021.

“I understand that,” he said to her. “I will protect the water.”

Although she says she doesn’t know if he will keep his promise, she’s glad she made her position clear.

“He knows what my concern is and he knows what he has to fix and protect,” she told the BBC.