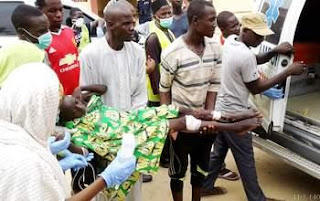 No fewer than five persons were killed in early morning suicide bomb attack at Gamboru town in Gamboru-Ngala Local Government Area of Borno.

The News Agency of Nigeria reports that the incident occurred at about 5:00 am, hen a teenage male suicide bomber detonated an Improvised Explosive Device strapped to his body in a mosque at Yobe area of Gamboru.

The Theatre Commander, Operation Lafiya Dole, Maj.-Gen. Rogers Nicholas, confirmed the attack to NAN in Maiduguri. Nicholas said that five persons were killed in the attack, as against the 11 earlier reported. He added that the troops had also neutralised a suicide bomber at Rann, headquarters of Kala-Balge Local Government Area.

“Yes, but only five killed and another suicide bomber neutralised in Rann.” However, Lawan Abba, a resident of Gamboru, told NAN that 10 persons were killed and six others sustained injuries in the attack. Abba disclosed that the suicide bomber sneaked into a crowded mosque while people gathered to observe morning prayer and detonated the explosive.