One would hope that the so-called cloud of the University of Ilorin would in fact circulate the ‘WiFi-sphere’ of the campus, but reverse is the case. Even in places where the Unilorin_Cloud have been observed by students to be available, it appears that as soon as the authorities notice the web of students using such spots, it gets deactivated. Is this a way of the school authority telling students that they are constituting nuisance, or that they have exhausted the amount paid for bandwidth? I wonder!

In a recent conversation with one of my closest colleagues, who agitated her feelings regarding the issue of the unavailability of the Unilorin_Cloud in accessible and conducive locations for students; that it would have been better if she had done the normal ISP subscription than pay for this ‘rubbish’ WiFi. Of course, all UNILORIN students also share in this plight. Come to think of it, the sight of a fellow students sitting by the roadside, or asking annoying questions such as “WiFi dey dis side?” or standing for hours with hands raised (as if in adoration to God) to get better signal is just very disheartening and pathetic.

For those not conversant with what Unilorin_Cloud is, here is a scholarly definition: Liberty (2018) defines Unilorin_Cloud as “an abstract concept, paid by all but almost non-existent, used by a feudal set of students in the University of Ilorin”. Some students may be familiar with password codes such as ‘elib’, ‘cls’ and the likes; others may used the conventional ‘surname-as-password’ code. Whichever way, a question still begs if the Unilorin_Cloud is available and accessible to ¾ of the student populace? Let’s hypothesize that a quarter of students in the University are the ‘big boiz’ and ‘big galz’, that is, those who claim to be self sufficient in purchasing the normal monthly ISP subscription. Obviously, the answer to this question is a colossal NO, because who would not take joy in standing for hours to access a very poor WiFi network.

This is not to say that students don’t use the school WiFi, they do apparently. Some even have memories of wasted hours using the Unilorin_Cloud. Personally, I recall the long hours under the pavilion at the Faculty of Arts, the injurious hours of loitering around the walls of the Faculty of Law, the time spent beside the Senate Building, my once-upon-a-time usual morning routine in front of the Student Affairs, and most remarkable, night classes as the Student Union Building (SUB). All these are now in the past and forgotten. I can say for a fact that there are no Unilorin_Clouds at the Faculties of Arts and Law, at least not one you can successful connect to. This is really disheartening and a fraudulent act, I mean, just imagine, for something we paid for – why can’t we use it? Well, #ThisIsNigeria where lots of anomalies happen. If lecturers can demand for some kind of incentives from students before attending to them, what else can be more contradictory in the University? Well, that’s a story for another time.

The latest Unilorin_Cloud spot on campus now is the bank area (ask for directives from a fellow Unilorite), so when a colleague says he/she is going to the bank area, you’d better not expect money from him/her. I would then wonder, is this a customer-enticing strategy employed by the banks or is it another case of imprudence on the part of the school authority? Don’t answer that, it’s rhetorical. You shouldn’t even dare to blame nor jeer at students who muster around to use the available WiFi, don’t call them Jews rather refer to them as human rights activists. They are the ones saying – “come what may, I paid for this, this is my right”.

I would advise the University authority to improve the services of the ironical Unilorin_Cloud by making it warmer (everybody loves a warm atmosphere) or scrap payment for bandwidth and stop extorting and exploiting student.
Shalom! 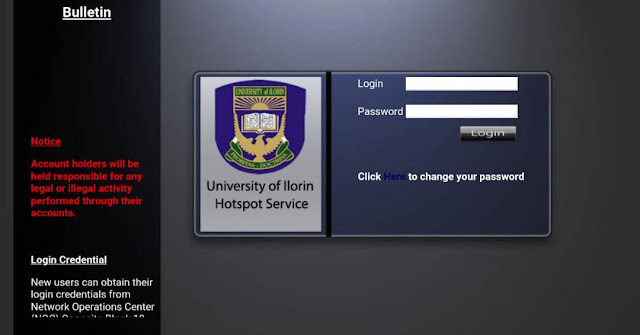