Picture of US Secretary of State Rex Tillerson in Afghanistan appears to have been altered to suggest he was in Kabul, not a US air base miles away.
Images show him meeting President Ashraf Ghani in a windowless room at Bagram Airfield, under a US military clock and a red fire alarm.
But an Afghan press release with a similar picture minus the clock or alarm says Mr Ghani “received” Mr Tillerson.
Both sides initially said that the meeting took place in Kabul. The US State Department later issued a correction, saying it had taken place at Bagram, the biggest American military base in Afghanistan.
A photo tweeted by the embassy clearly shows the clock and alarm, “in what would be a giveaway that it was an American military facility”, the New York Times notes.
But in the Afghan government’s photo, there is no clock or alarm, with one expert telling the Times there was “no question” it had been manipulated. Neither side has explained the discrepancy.
UCJ, UNILORIN. 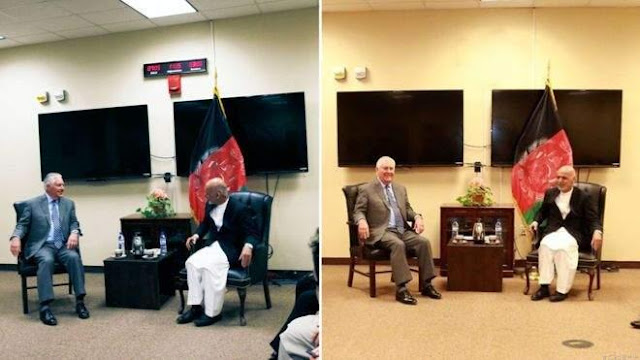