Toyota is very invested in love. The automaker has a central philosophy of making vehicles that inspire ‘Aisha,’ a concept that literally means “beloved car” in Japanese.
But the nature of ‘Aisha’ is changing, necessarily, just at the nature of automobiles themselves are fundamentally changing as we usher in automated and semi-autonomous driving.
The key to making ‘Aisha’ work in this new era, Toyota believes, lies in using artificial intelligence to broaden its definition, and to transform cars from something that people are merely interested in and passionate about, into something that people can actually bond with – and even come to think of as a partner.
To create a bond between a person and a car that’s more than just skin (or topcoat) deep, Toyota believes that learning and understanding drivers, combined with automated driving, and an AI agent that’s more companion than virtual assistant, is key.
That’s why it created ‘Yui,’ the virtual copilot it has built into all of its Concept-i vehicles, including the Walk and Ride, both of which debuted at this week’s 2017 Tokyo Motor Show. 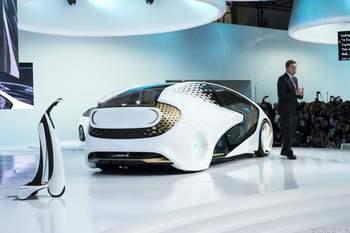