President Trump made his way to a high-dollar GOP fundraiser, wherr he briefly met with a few local officials to discuss the ongoing recovery efforts following Hurricane Harvey and to strategize on how the state could better prepare for future hurricanes.
Trump said he was open to launching major infrastructure projects in the Houston area that are aimed at reducing flooding during future storms and suggested that homeowners living in flood zones install water-resistant drywall on the first floor of their homes — an idea that he credited to his experience in the construction industry. “I’m the builder president. Remember that,” said the president.
Trump told the officials that he wants them to present him with plans for how Houston can address flooding “on a more permanent basis,” and that he’s interested in the concepts he has heard about thus far, although he needs to learn more about the costs. 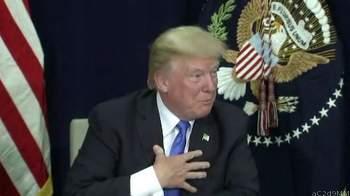