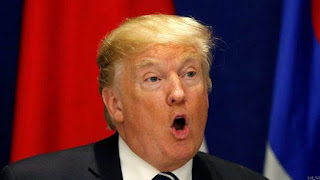 US President Donald Trump has boasted that his nuclear button is “much bigger” and “more powerful” than North Korean leader Kim Jong-un’s. Mr Trump’s tweet is the latest contribution to an increasingly personalised feud between the nuclear-armed leaders. Mr Kim threatened earlier this week that his nuclear launch button was “always on my table”.

Unsurprisingly, Mr Trump’s unorthodox words sent social media into a frenzy. It ended a quick-fire day of tweeting by Mr Trump in which he took credit for a lack of plane crashes, announced awards for “corrupt media” and threatened to pull aid from Palestinians for failing to show “appreciation or respect”.