It looks like President Trump finally got his tax cuts, with the House passing the bill yesterday during the re-vote. So he seems to be in high spirits and is only targeting his usual critics – the media and democrats❗
🐦 Together, we are MAKING AMERICA GREAT AGAIN!
🐦 We are delivering HISTORIC TAX RELIEF for the American people! TaxCutsandJobsAct
The House passed the legislation 224-201 in a revote Wednesday due to a procedural error a day earlier when aspects of the initial legislation did not comply with Senate budget rules. The changes were mere formalities.
🐦 WE ARE MAKING AMERICA GREAT AGAIN!
🐦 The Massive Tax Cuts, which the Fake News Media is desperate to write badly about so as to please their Democrat bosses, will soon be kicking in and will speak for themselves. Companies are already making big payments to workers. Dems want to raise taxes, hate these big Cuts!
The bill, which the president is expected to sign, is the first major legislative victory for Trump and the culmination of a career-long goal for House Speaker Paul Ryan (R-Wis.), long a tax policy wonk who once served as chairman of the House Ways and Means Committee. Wrapped up in the legislation were other GOP priorities, including a repeal of the Affordable Care Act’s individual mandate and opening Alaska’s Arctic National Wildlife Reserve for oil drilling.
🐦 Was foxandfriends just named the most influential show in news? You deserve it – three great people! The many Fake News Hate Shows should study your formula for success!
On Wednesday, web site Mediaite had named the FNC morning show the Most Influential In News Media for 2017, topping a list that also included, in reverse order, MSNBC’s Rachel Maddow, Matt Drudge, FNC star Sean Hannity, and CNN chief Jeff Zucker. Mistaking Mediaite’s “most influential” for “best,” Trump crowed that the Trump News Network morning show hosts “deserve it” and that “the many Fake News Hate Shows should study your formula for success!”
🐦 Home Sales hit BEST numbers in 10 years! MAKE AMERICA GREAT AGAIN
🐦 House Democrats want a SHUTDOWN for the holidays in order to distract from the very popular, just passed, Tax Cuts. House Republicans, don’t let this happen. Pass the C.R. TODAY and keep our Government OPEN!
Democrats have remained united in their opposition to a Republican spending bill that does not include a solution for unauthorized immigrants under the Deferred Action for Childhood Arrivals program or parity for defense and non-defense spending. But Republicans have insisted on addressing DACA in the new year, which would include certain border security provisions wanted by the White House. 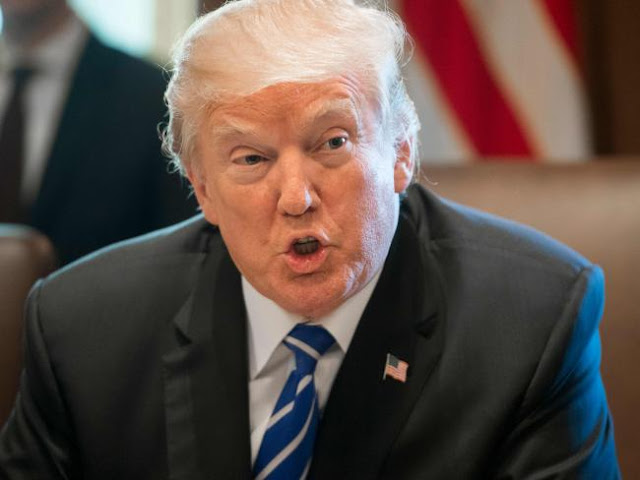