A Turkish professor, on hunger strike since losing her job in a purge after last year’s failed coup, has been convicted of belonging to a banned far-left group but freed pending an appeal.
Nuriye Gulmen was sentenced to six years and three months in jail for being a member of the DHKP-C group. A co-defendant, primary school teacher Semih Ozakca, was acquitted of similar charges. Both deny links to the group.
Turkey says the DHKP-C is a terrorist organisation. Gulmen was found not guilty of lesser charges, which related to the organisation of illegal protests. Mr Ozakca has also been on hunger strike since losing his job in the crackdown, in the summer of 2016.
On 21 October, the court released Mr Ozakca on condition that he wore an ankle monitor. A third defendant, Acun Karadag, has been acquitted on a charge of participating in illegal protests. 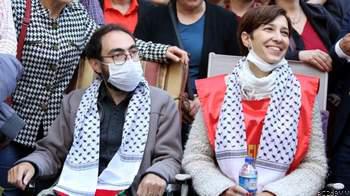