Two women from Hawaii who were lost at sea for nearly five months have been rescued by the US Navy.
Jennifer Appel, Tasha Fuiava and their two dogs were found Wednesday, drifting about 900 miles southeast of Japan, a Navy statement said.
In a call with the media Thursday, Appel described the situation prior to the rescue as “very depressing” and “very hopeless.” “When I saw the gray boat on the edge of the horizon, my heart leapt because I knew we were about to be saved,” Appel told NBC News. “Because I honestly believed we were going to die within the next 24 hours.”
The group had left Hawaii in the spring, bound for Tahiti, but ran into trouble on May 30 when bad weather damaged their sailboat’s engine. The women decided to keep sailing, but strayed off course, according to the Navy.
UCJ, UNILORIN. 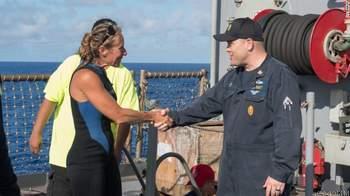