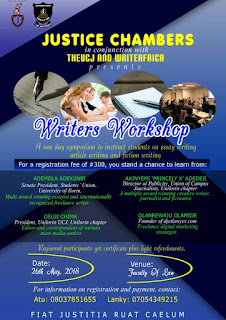 The workshop started at exactly 11pm with a recital of the National Anthem. A brief introduction of the workshop was done by Ojo Emmanuel. Bukola Smith welcomed all participants and also gave a brief overview of the purpose of the workshop. The first speaker, Olamide Olanrewaju, was introduced and he gave an overview of blogging questions by Mr. Thaoban Oloriegbe, and Miss. Omosomi Davida were entertained, Mister Thaoban asked another question which was attended to, the speaker tried to explain the financial aspect of blogging. A question from a participant on how to make the most of blogging to make money was clarified on.
Olaoluwa Jaiyeola’s question on whether profit can be made from traffic was also attended to as the speaker touched on the way that pay-per view transactions work. However, he mentioned that part of the appeal of a blog is that it is ad-free because they take away from the value/purpose of the blog. 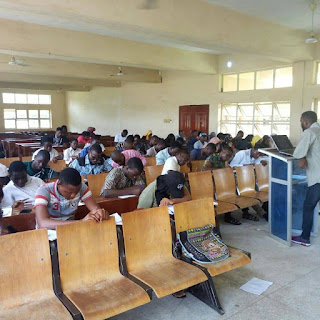 “I learnt a lot about developing myself as a writer….
Beats seeing Fela Durotoye”
Olaoluwa Jaiyeola
Faculty of Law
One participant asked for the practical way that a person could start a blog. The speaker mentioned then the platforms where users can blog from free of charge and otherwise, Omosomi Davida asked again about the way that a blog can be used to advertise her products. The speaker touched on freelance writing and gave examples of websites that would be instructive. He also gave tips on how to look like, and eventually become a professional, He also differentiated between a writer and a content writer, and encouraged participants to take courses and learn more on things like copyrighting and others which then allows participants to charge more for their work. The speaker gave examples of websites which he thought would help to teach skills beyond writing like networking, etc.
“….they have really enlightened me and guided me on how to improve and succeed on my writing skills…”
Sanusi Akinkunmi Farouk
History & Int’l Studies (100L)
Mr. Damilola Olatunji asked about if there is a need to open a dollar account to access the money gotten through blogging. The speaker clarified on the ways that Nigerians can access profit made, another participant’s question was addressed. The speaker considered how content can be chosen, as well as the importance of picking one topic and sticking to it, making sure that it is always useful and especially using one that fits with your schedule. One person asked for an explanation on copyrighting. On that, the speaker described sales pages and then concluded his lecture.
“writer’s workshop is a platform where I’ve learnt different ways on how to be a great writer”
Adedokun Abass Waheed
Quantity Surveying Department
The principal partner Bukola came forward to stress the importance of every person participating and taking something from the workshop. On Emmanuel’s prompting, Davida mentioned what she has learned from the speaker. 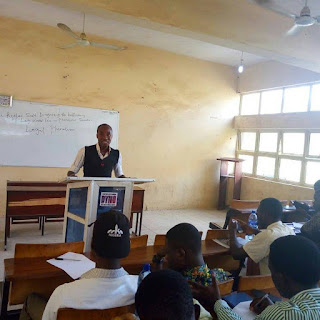 Mr. Akinyemi Princely X was introduced and he starts by stating that he does not believe that creative writing is a thing that can be taught and what he advises is to read and write enthusiastically. He started with an overview of a story brief, and gave an interesting perspective on the plot and how it intertwined with characterization. He further explained the setting and how it is affected primarily by the plot, and how it affects characterization. He explained that the theme affects the plot in the way that it carves what the plot seeks to address. The theme is the reason why a story is written, It guides the writer throughout the narrative. It determines other elements. Diction was also addressed, whether complex or otherwise, the diction is dictated by the audience.
“…writer’s workshop has made me gain more knowledge, especially on fiction writing…”
Alhasan Aisha
Common Law
Writers are implored to write on things that they, themselves, can relate to. Because there is no limit to creativity, one must write what he is comfortable with, and still carry his audience along, this is where simplicity comes in, even if the language is not the same, he stressed the importance of metaphors and similes above other figures of speech as they help the reader to visualize the plot. While engaging the participants, he considered description and how imagery uses all five sense organs and not just the visual. 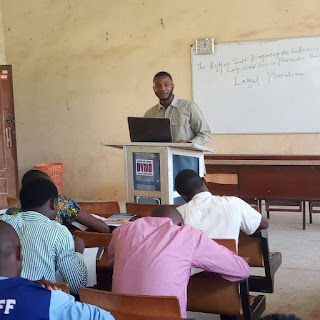 He threw out a challenge, where participants were to write a description involving a number of sense organs. Participants read out excerpts of what they had written and the speaker gave comments on what had been written, a question was entertained and the speaker clarified that showing and telling an audience what is going on in a story is done by using description.
He then moved on to the effect of punctuation and explained how these aid easy understanding and help a reader understand the text better, he read examples of narratives where punctuation has been used in different ways to give different effects and reduce the use of verbosity. Before concluding, he mentioned that making money from writing would be difficult if a person does not develop himself and work hard. He encouraged getting a mentor. He gave examples of other writers who have established themselves as creative writers and concluded his presentation on a high note. Afterwards, questions were entertained.
Ojo Emmanuel again received feedback from the participants on what they had picked up from the speaker and emphasized that what is being taught here is not only for academic purposes but also for them to excel financially as well. He introduced the next speaker and announced a 20 minute break before his speech. The third speaker is called to the podium and he announced that he would be speaking on ‘Maximizing the benefits of Article writing’. His speech followed the format stated in a material which was sent to all participants.
He explained that article writing requires skill rather than talent and gave the types of articles, as well as a breakdown of the structure. He further pointed out the differences between an article and an essay and spoke extensively on how to write a compelling essay. Mr. Chima stressed that it is extremely important to write on a field that you are interested in, and dropped other pointers on writing compelling articles for magazines.
Conclusively, Mr. Osuji challenged the participants to an article writing competition on any topic of their choice, and promised prizes for winners.  At the end of his talk, Miss Bukola Smith addressed the participants briefly. She informed them that as a reward to the participants who waited till this time, they had all automatically qualified to enter into an essay competition organized by Write Africa, with massive cash prizes for winners. She invited Mr. Kunbi Ademola, the last speaker of the day, who expatiated more on the competition. He then stated that, writing essays is a great opportunity to win massive prizes and gave examples of such grand competitions.
He further spoke on how to write a good essay and educated participants on how to win essay writing competitions, giving some useful tips. The participants were particularly attentive as lots of questions were raised. After his conclusion, Mr, Damilola Olatunji addressed the participants and advised them to brainstorm on all that they have learnt. Miss Bukola also came to remind participants on the essay topic and specified modes of submission. She then distributed certificates to the participants and concluded the event minutes after 4pm.
“It was a wonderful programme”
Akintola Abdul Rahman
Mass Communication
Report by JCI
Tags: National Dailies