(CNN)Tensions on the Korean Peninsula are the world’s most dangerous security issue, and must be resolved fast and diplomatically to avoid war, a top United Nations envoy said after a rare visit to North Korea.

Jeffrey Feltman, the UN under-secretary-general for political affairs, visited the reclusive nation between Tuesday and Friday, the first trip there by a top UN official in six years.

During his visit, he met with Ri Yong Ho, the North Korean minister for foreign affairs. Their meeting came at a particularly tense time — a week after North Korea tested an advance long-range missile and South Korea conducted military drills with its ally, the United States.

Ri and Feltman “agreed that the current situation was the most tense and dangerous peace and security issue in the world today,” the UN said in a statement.

Feltman stressed the need for relevant Security Council resolutions to be implemented, saying a diplomatic solution could be achieved through sincere dialogue.

In a statement to journalists, he said there’s an “urgent need to prevent miscalculations and open channels to reduce the risks of conflict.” He emphasized that the international community is alarmed by escalating tensions, and is committed to a peaceful resolution.

“Time is of the essence,” he said.

North Korea remains technically at war with its neighbor South Korea after the Korean War ended in armistice but not peace in 1953.

Feltman’s trip coincided with the annual Vigilante 18 military drill held by the US and South Korea, which the US Air Force says is designed to boost the “combat effectiveness” of the alliance. 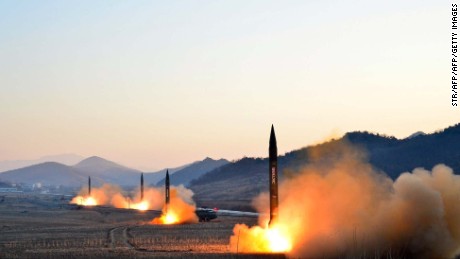 North Korea’s missile tests: What you need to know

The drills came after Pyongyang test-fired a Hwasong-15 missile November 29.

It was North Korea’s first ballistic missile test since September. The Hwasong-15 is believed to be its most dangerous and technologically advanced long-range ballistic missile, and demonstrated a range of around 13,000 kilometers (8,000 miles), which puts most of the planet in range. North Korean state media purports it can carry a “super-large heavy warhead.”

Feltman’s visit to North Korea was a response to a “long standing invitation” from Pyongyang authorities for policy dialogue, the UN said ahead of the visit. 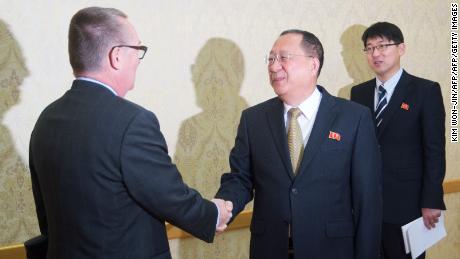 Ri and Feltman met in Pyongyang on December 7.

The last senior UN official to visit North Korea was emergency relief coordinator Valerie Amos in October 2011, according to the UN. The last time an undersecretary-general for political affairs visited the country was in February 2010.

Six UN agencies are represented in North Korea, staffed by a team of about 50 people from across the globe, the UN said in a statement.

The former American diplomat is a key adviser to UN Secretary-General Antonio Guterres on global peace and security issues. He spent nearly 30 years at the US State Department before joining the UN in 2012.

China has repeatedly called for a de-escalation of tensions on the Korean Peninsula, including a freeze in the North Korean nuclear program in exchange for the halt of United States and South Korean military drills.

“(Wang) noted that the situation on the Korean Peninsula is still deep in a vicious circle of demonstrating strength and confrontation, and the outlook is not optimistic,” Xinhua said. “He said that all parties need to make efforts to ease the situation and bring the situation out of the ‘black hole’ of confrontation.”