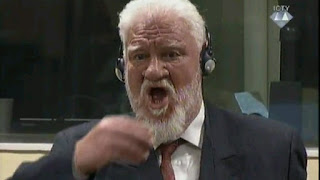 The UN court in the Hague says it could not have prevented a war criminal from taking poison and killing himself.

Gambian judge Hassan Jallow said that without specific intelligence, no measures would have guaranteed the poison was detected. Bosnian Croat war criminal Slobodan Praljak died after taking potassium cyanide when his prison sentence was upheld.

Judge Jallow – who was appointed by the tribunal to investigate Praljak’s death – said it was unclear how or when the convicted man came into possession of the potassium cyanide. Even if UN staff had received information about it, he said, the 200-300mg of powder – equivalent to a single tablet – “could easily have remained undetected even through the most intrusive searches of persons, cells, and other areas”.

Limitations on intrusive searches and the screening equipment available to staff also meant poison would be hard to detect, Judge Jallow said.

He made recommendations for search regimes and also proposed a 30-minute delay on the broadcast of court judgements. However, he said there were no gaps or flaws in the overall treatment of detainees and did not propose any changes to regulations.