The process of administration of justice in any society cannot be fostered in isolation.
Put more aptly, while there exist a dependable judiciary where we are certain of a manifest dispensation of Justice, there must be ministers too, as they say, in the temple of justice. These ministers who are legal practitioners are expected to help the court at all times, the sight of the interest of their clients notwithstanding.
This applies to all societies, University of Ilorin Students Union inclusive. It is in furtherance of this aim that the Body of Benchers on Saturday June 23rd, 2018 in University of Ilorin lecture theatre IV caused 87 successful candidates to be called to the Student union Bar of the institution in order to entitle them to right of being heard and to represent the interest of their clients in the Court.
The Ceremony which started with the procession of members of the Body of Benchers into the Hall saw in attendance the sub-dean of the Students Affairs, The Attorney General of the Student Union ably represented by A.A Mustapha, the President of the Student Union Bar, The guest lecturer, Mr. Charles Adekunle ably represented by Mr, Oke Ridwan Olayemi and Justices of the Students Union among many others.
While administering the compulsory oath for the new wigs, Hon. Justice Kanzullahi Hibatullahi, Chairman, Body of Benchers and Chief Justice of the Students Union, charged the new lawyers to be an embodiment of integrity and discipline since they shall need these vital virtues not only in Court but also in general life matters.
His Lordship in his usual way admonished the new wigs viz: “Being called to bar is like a building in its foundation stage. It is not an end to itself, it is a means to an end, and the edifice is completed when you become a thorough and seasoned advocate with sound knowledge of law. Whether you complete this process is your choice, it cannot be forced on you, and we can only implore you to do so because it does not only build you, it builds our system.”
His Lordship further charged the legal practitioners to try and meet up with the expectations Justice has for them. He said: What this entails is critical thinking and ability to rationally question the status quo. To contribute meaningfully to the development of our legal system, you must appreciate it uniqueness. You should not go on a borrowing spree to the detriment of our legal system.”
The program also witnessed the award of the prestigious ranks of Senior Advocate of the Union to four (4) deserving members of the bar who have scaled through the onerous process of examination.
Charging the Learned Silks, the Chief Justice of the Students Union said To the newest members of the inner bar; the privilege given to you is just one side of the coin, the other side is responsibility. You are called to a higher standard of behavior or conducts than others. You must, as beacons of light, lead the way for others to follow.”
Earlier, the Sub-dean of student affairs of the University, Dr. Alex Akanmu, who represented the Dean of student affairs at the occasion commended the judicial council of the Union for maintaining the integrity of Judiciary. He noted that as a silent observer of the judicial atmosphere of the Students Union, his presumption of correctness in principle and law for the Judiciary of the Students Union has not been whittled down, not even where there was an extremely political case that tends to swing the sword of Justice anyhow.
Dr Alex Akanmu therefore admonishes the new members of the bar to be upright in all their dealings and should see this as an opportunity to practice what they will eventually practice when they eventually get to the field.
The guest Lecturer, a distinguished advocate, Mr. Charles Adekunle charged the new wigs to be determined in what they do. He recounts his experience as an undergraduate and an active legal practitioner. He reminded the new wigs that people will cast aspersions on their character and discourage them from practicing law.
He urged them to never be discouraged as this shall help them later in the normal course of life. The Guest Speaker, was ably represented by Mr. Oke Ridwan, the Erstwhile Attorney General of the Students Union.
Mr. Omotosho Muhammad, the President of the Students Union Bar in his good will message congratulated the new wigs and learned silks. He however expressed his dissatisfaction on the fact that almost less than a quarter of those that are called to bar appear in court. This, he said, the Bar is taking progressive steps towards putting an impressive end to.
According to him, the disciplinary committee of the bar has been working on how to manage the issue of members not practicing or appearing before court. He stated that the committee would discipline erring legal practitioners whose conduct negated the sacrosanct standards of the profession or amounted to infamous conduct in a professional respect. He said the disciplinary committee will release names of disbarred members soon. Of note is the impressive performance of some candidates, with one attaining the level just short of the first-class grade, he said.
He added that out of 113 candidates that applied for the call to bar examinations, 87 were successful at the April final examination.
Meanwhile, Miss Daniel Oluwatomisin Promise emerged as the best candidate from the examination with 43 points and an award in recognition of same was presented to her by the Sub-Dean of student affairs, Dr. Alex Akanmu, courtesy of the Judicial Council of the Student Union.
Other dignitaries that graced the occasion include; Mr Alao Idris(the former Student Union President of the University), Mr. M.A Abolarin (the Chairman, Legal Practitioners disciplinary committee), the Chairman of the University of Ilorin  Students Anti-corrupt Practices Commission (UISAPC) members of Students judicial council, among many others.
UCJ, UNILORIN. 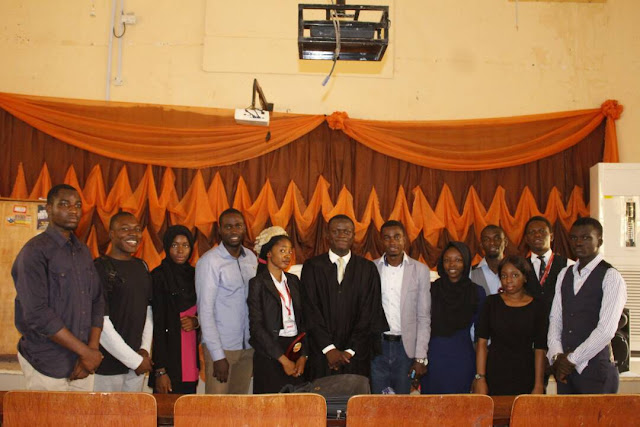