√ New Registrar Promises Positive Change
The University of Ilorin has ushered in her new and 6th registrar; Dr (Mrs.) F. M. Olowoleni, with a personality lecture titled: ‘To whom much is given,’ at the University auditorium, University of Ilorin.
The lecture, delivered by Chief Y. F. Oyeyemi; the Aboaba of Offa was the first of its kind.

Prof. Sulyman Age AbdulKareem, the Vice Chancellor in his opening remarks titled: “Deserving Rewards,” applauded the new registrar’s work and competence towards the survival and sustainability of the University.

The VC went further to address the guest lecturer; Chief Y. F. Oyeyemi as a “Principal Emeritus Administrator by excellence” urging maximum attention in his lecture.

The Deputy Registrar Counseling Affairs; Dr. Adisa in his welcome address congratulated the new Registrar and commended her professionalism and character. He informed the audience on the guest lecturer’s status which included being a former commissioner and assured an interesting session.

The new Registrar; Dr. F.M Olowoleni in her speech thanked the VC for the event and prayed that her new era will “usher in a positive change”. She explained and termed her work as “the heartbeat of the University”, “the administrative hub of the University” among others and reminded that “it is not about me… it is about all of us”.

In addition, the speaker admonished that “better times are convincing to the University because of this new event”.

She revealed her intentions to uphold professional characters which included fairness and justice as well as to “welcome constructive criticism and ideas” in her administration.

In his citation, Dr. M. Adedemiji regarded him, Chief Y.F Oyeyemi as “a great man of the people” and awestruck the audience with his achievements and national contribution.

In his lecture on “To whom much is given”, the lecturer gave numerous instructions and guidelines for the Registrar’s conduct in the University. Learning from others and beware of taking precipitate decisions were some of the guides. He instructed that her decisions must be towards the growth, progress and development of the University.

The speaker opined that the registrar is the Chief Administrative Officer of the University and must watch against being a “Loud Sounding Nothing” but develop personal strategic plans, remain purposeful, and develop personal mission statement.

Furthermore, the erudite advised that she should be “wise as biblical Solomon and strong as biblical Samson”. He also urged positive attitude towards her colleagues which were to be accessible, accommodating, adopt meritocracy, appreciate staff’s excellence and exemplary performance among others.

In his emphasis on discipline, he admonished the registrar that indiscipline cannot exist if she wants to take the University of Ilorin to greater heights and that “expectations for outstanding performances are high”. 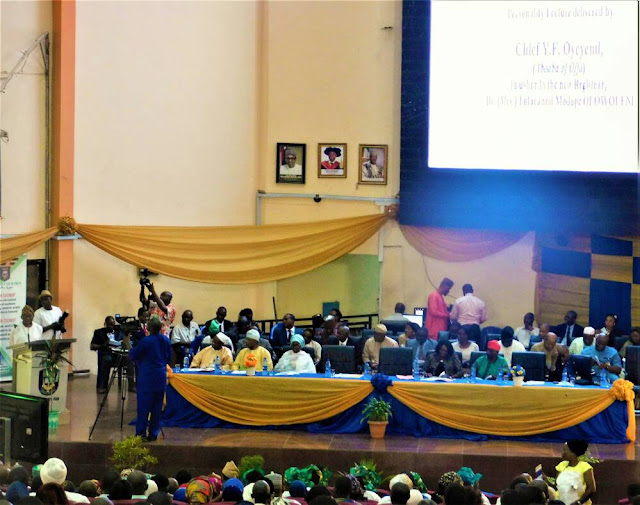