The Inter-religious Council of University of Ilorin, has held her 1st conference themed; “Peaceful Co-existence among Adherents of different Religions: A Panacea for National INtegraton and Development” on 25th of June, 2018 at the Main Auditorium, University of Ilorin, Kwara State.
Professor Olatunji; the Chairman Inter-Religious Council and DVC Research, Technology and Innovation in his welcome speech revealed that the conference had been conceived during the administration of Professor Oloyede as VC as a way to ensure peaceful co-existence among religion on campus. The speaker however expressed the existence of religious harmony in Unilorin and that such should serve as a model to the nation for at large.
The Vice Chancellor; Professor Age AbdulKareem in his opening remark commended the Inter-Religious Council for such event and admonished that religious tolerance is the watchword of the University. The VC admonished that the conference was aimed at achieving national peace as Nigeria is going through series of socio-political challenges. He concluded with “what you don’t want others to do to you, don’t do to others”.
John Olorunfemi Onalyekan; the Catholic Arcbishop, Abuja gave a speech as keynote speaker titled “Religious Harmony and Nation Building in Nigeria”. The speaker expressed that his presence was to “confirm and profess his faith and conviction that religious harmony is possible in Nigeria”.  He revealed that one of Nigeria’s problem is that “anyone can become a religious leader in one night” resulting to ignorant religious leaders.
The erudite proposed that a theoretical and practical approach will promote religious harmony in Nigeria. He explained that the former was to discover and celebrate common grounds among different faiths as “what we have in common may outweigh what separates is” and the latter for faiths to collaborate and tackle challenges that affect the society like HIV/AIDS.
Professor Oloyede; the Secretary General for Nigeria Supreme Council for Islamic Affairs and JAMB Registrar, ably represented gave a speech on “Religion, Peace and National Development: the Interconnectivity”. The speaker declared that religion “has suffered in the hands of religious leaders” and urged that Nigerians “go back to the scriptures and learn how prophets managed pluralistic society”.
The erudite however admonished that the adherents of religions should be addressed and not the religion itself when religious crises arise. He concluded with a view of religion as “a powerful instrument of a society” and an interreligious society as “a divine design of nature”.
A reputable leader, Igwe Emmanuel in his speech expressed his distaste for theoretical approach and opined that African culture will solve the issues of co-existence in Nigeria. The speaker urged that Nigerians should “sit down and evaluate ourselves by finding out the values of everyone from different tribes and ethnic groups”.
The Vice Chancellor of Benue State University; Professor Kembe, ably represented presented a speech with an urge for interreligious dialogue and cooperation as key for religious harmony.
Professor Olagoke; Founder and Spiritual Leader, Shaufaudeen in Islam in his speech opined that religious teachings should be internalized in the family to uphold unity as well as religious leaders to acts in cooperation to foster harmony.
Other Eminent Dignitaries were Professor Ambali; past Unilorin VC, Unilorin DVC Academic, Chairman Inter-religious Council Unilorin, Registrar of Unilorin, University Bursar, Bishop of Kwara State, Provosts of Health Sciences, VC of Halikmah University, University Librarian, Deans and Professors.
UCJ UNILORIN. 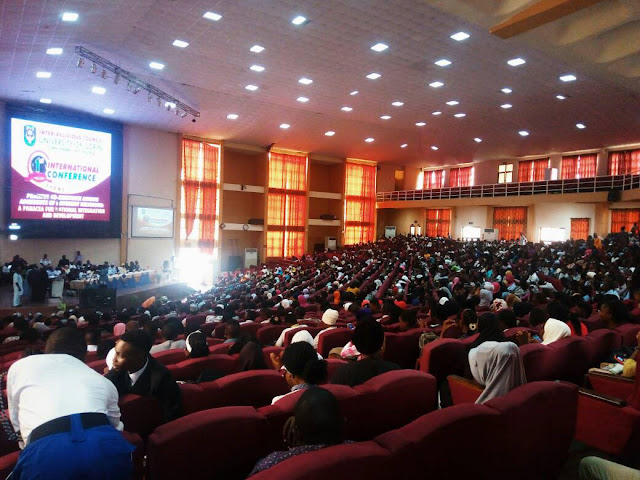