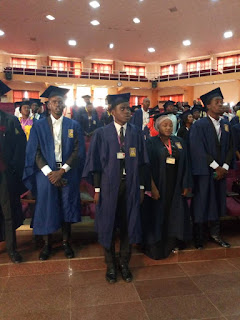 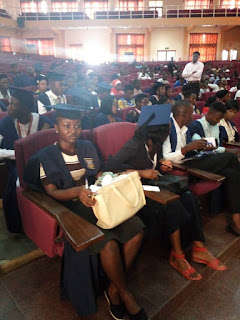 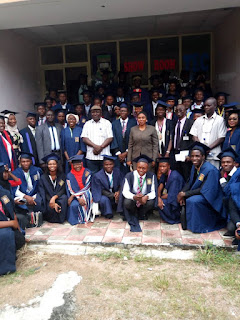 Representing the Vice-chancellor; the Dean of students affairs, Professor L.T Ajibade welcomed everyone present and commended the outgoing administration. Mounting the podium for the second time,  he noted that the election for the new administration was free and fair.

“For the first time in history, 8 equally eligible and capable students contested for presidental election and in total, 35 people contested and 11 people emerged as winners.” He said.

Stating that the process was not without turbulence, He thanked the students for their patience and peaceful acts throughout the process of the election. He noted that “modern unionism is constructive unionism”.

He charged the newly elected to be very honest and uphold integrity with a reminder that the essence of their position is service. According to him, leadership is not about aggrandizement: “To be successful as a leader you need to gain the trust of your colleagues and this can be achieved with honesty and integrity”.

He urged the president to be committed to the welfare of his colleagues  noting that there would be dissent and disagreement but such should not lead to “sinking the ship of the administration”.

When invited to speak, Adebisi Ridwan Abinbola, the outgoing president appreciated everyone present  for their support. In his speech titled “soldier go, soldier come,  barracks remain”, he admonished that the 2017/2018 administration raised the bar of which some people have refused to accept. He asserted that “success is a different stroke for different folks”. Commitment and zeal he noted would ease the path, as the task ahead is enormous

The Legal Adviser to the Students Union, Professor Olorukwoba after dissolving the outgoing administration, he inaugurated the incoming executives.

In his speech, the incoming president, Animashaun asserted that the previous administration achieved a lot as which his own administration would be towed on. He revealed that they “have resolved that we would tag the new administration together we can invest in our people’’

He promised to further strengthen the academic stability of the University as well as other aspects inclusive of sport. He therefore assured that the administration would be an all-inclusive one for the people that brought him into power.