In a bid to further enlighten students and build practical understanding of the profession, the Association of Mass Communication Students (AMCOS), in conjunction with the Department of Mass Communication, University of Ilorin has organized a Student-Veteran Interaction, set to hold on Saturday, February 10, 2018.

The event, which will see young creative media veterans come to rub minds with the students in an interactive session is only the second of its kind in the Department with the first initiated by the National Publicity Secretary, Alliance for Progressive Change (APC), Mallam Bolaji Abdullahi.

The theme of the event is “The Extra Factor: How to stand out in the media industry” and The Guest speakers are Bolaji Alausa, Executive Creative Director, Noah’s Ark Communications and Victor Mark Eniola; Head, News, Events and Current Affairs, Sweet 107.1FM.

Both speakers are multiple award winning veterans who have carved a niche for themselves in their own fields. Bolaji Alausa  is the first Nigerian to win two Cannes awards. He also won Nigeria’s first Epica in 2013 and is currently ranked 14th most published creative director according to Lurzer’s Archive.

Victor Mark, on the other hand is a three time nominee for Nigerian Broadcasters Merit Awards and Three Time Awardee for Scream Awards.  Other Awards won  includes Ivory Honours, 30under30s Awards amongst others. He believes in youths and holds the opinion of “thinking without a box”.

The event will begin by 12pm and would hold at Communication and Information Science Lecture Theatre (CISLT) in the University of Ilorin premises. 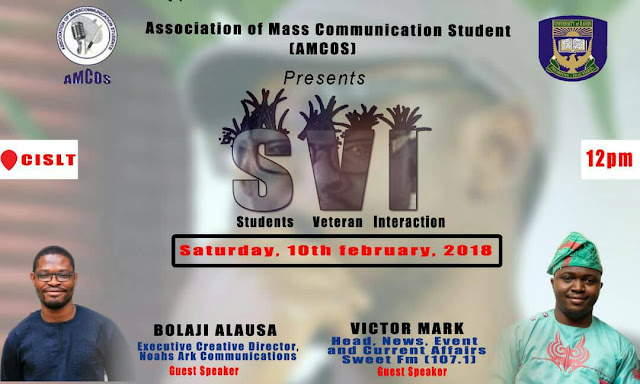