The National Association of Agriculture Students (NAAS), University of Ilorin, has organised an empowerment scheme for students in its faculty on June 25, 2018.
The event which was held at the Agriculture Lecture Theatre (AGLT), commenced at 3:00 pm prompt.
It played host to a cream of seasoned entrepreneurs such as: C.E.O, D-Positive Image Consult, Mr. Nasir Abdulquadri; C.E.O, Merit Choice Global Resources, Icon Leland Ishau; C.E.O., Afcarope Farm Nigerian Ltd., Onusagba Muhammad Sanni; and C.E.O, Lanko Theory Educational Consult, Isiaq Abdulwaheed Omotayo (Lanko Theory).
Others include: Deputy Director, Physical Planning  Unit (Unilorin), Arc. B.O. Adams; C.E.O, Ghazal Consult & Educational Services, Mr.  Balogun Ghazal; and the Founder, Silas Hyelhira Foundation, Theophilus Yiakazah Silas.
In his welcome address, the NAAS President, Comr. Asheer Ahfeez, appreciated the dignitaries and the audience for gracing the event. He also noted that the programme was the first of its kind in the history of Faculty of Agriculture, University of Ilorin.
Setting the ball rolling, the first speaker, Mr. Nasir Abdulquadri, stated that “more than 87 million Nigerians live in poverty. And in every minute, about 6 Nigerians slide into poverty”. He went further to urge the students to make good use of every opportunity that comes their way.
“The future belongs to those who skip their nights seeking success. And this century belongs to those who create jobs, not those who seek job”, he said.
He ended his speech by quoting from the Qur’an and the Bible by saying, “you will never be rich except you decide it yourself. Heaven help those who help themselves”.
On his part, the C.E.O of Merit Choice, Mr. Muslim Ishau Olalekan, emphasised the need for students to change their mindset from ” negative to positive perception” if they intend succeeding as entrepreneurs.
He further stated that “to be poor is not when you have no money but, when you lack the thinking of bringing in new ideas”.
Mr. Olusanya Muhammad, a 200 level student of History Education, (Unilorin), shared his entrepreneurial experience with the audience.
According to him, he claimed to have ventured into agriculture and cosmetic products, the result of which, has expanded his employee-base to 1200 workers.”
“Surround yourself with people that give courage, and not people that will tell you that you can’t do it”, he said.
Muhammad ended his speech with the slogan, “if I can do it, then you can do it. If you can do it, then we can do it. And, if we can do it, then we can make Nigeria greater”.
At this juncture, one of the organisers, Mr. Samshudeen, facilitated the presentation of equipment to the winners of the various business categories.
The list of beneficiaries and the equipment won, include: Alade Christiana (hair dryer); Abdulkareem Nusirat and Olaniyi Ifeoluwa (one oven per person); Owa Samson (a brand new laptop); Abdur- Rahman Fatimat (sewing machine); and Ayodeji Mahfouz (clipper).
Moved by the success of the event, some invited dignitaries made financial pledges to support students interested in pursuing specific business ventures.
Thus, the C.E.O of Gazal Consult, Balogun Gasaal Ayodeji, pledged the sum of a hundred thousand naira each to two students found worthy of establishing businesses on their own.
The first hip-hop lecturer in Africa, Isiaq Abdulwaheed Omotayo (Lanko Theory) made a cash transfer of ten thousand naira to support the organisers for the initiative taken.
Anoch Initiatives promised to give a shop, in addition to bearing 50% of the rent and total furnishing of the shop.
Mr. Silas of Silas H… Foundation, promised the sum of fifty thousand, each to five students to set up their own business, with an additional sum of fifty thousand to the organisers. 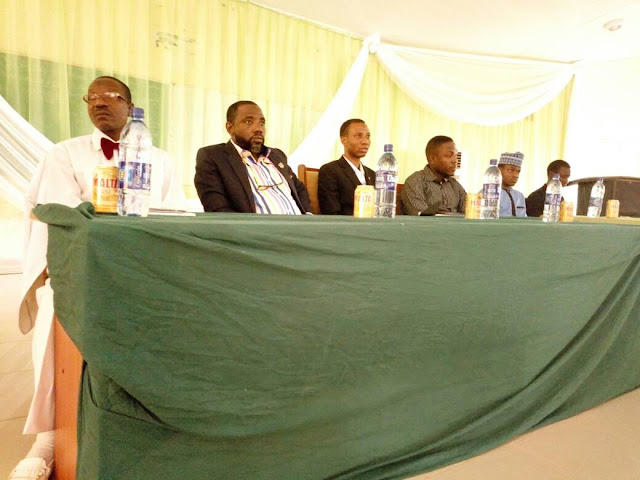