NIGERIAN UNIVERSITIES ENGINEERING STUDENTS’ ASSOCIATION
University of Ilorin
Official Press Release
February 11, 2018
THE FIRM POSITION OF THE CENTRAL EXECUTIVE COUNCIL ON THE WEAK RESOLUTIONS OF THE SRC
No one is more hated that he who speaks the truth – Plato.
This press statement represents the truth and nothing but the truth.
As stated in the Preamble of Article 1 of NUESA CONSTITUTION, ” We the students of the FACULTY OF ENGINEERING AND TECHNOLOGY UNIVERSITY OF ILORIN (hereinafter referred to as ”the faculty”) having firmly and solemnly resolve to bring peace, harmony, health and conducive atmosphere in the Nigerian Universities Engineering Students’ Association, University of Ilorin chapter and to provide a constitution which shall be a frame of reference and guidance in the conduct of the affairs of the entity, promotion of the general welfare of the members…”
As an association, our topmost aim shall be channelled towards  the promotion of peace  among all members, and the CEC shall go to any length to ensure the continuity of peace and tranquility so as to create an enabling and conducive environment in the faculty.
The news of the suspensions didn’t come as a shock, because in fact and in reality, the CEC has tried all its possible best to turn a blind eye to the gross incompetence, blatant incapability and conspicuous inexperience of the speaker and his cohorts of the SRC. An occasion of such Inexperience was when the Speaker, RT. Hon O. Olatunbosun (Horlajay), was telling the CEC about his readiness to become an enemy to the CEC and by extension to NUESA as a whole cum also made an attempt to suspend all CEC members for 2 weeks just because we decided to excuse the floor of the house when it had already adopted a motion for recess, after which he ordered the Executive President to forward an apology letter to house for that event. If n’t for the timely and mature intervention of Hon. Newton that day, the incapability of the speaker would have been revealed and openly exhibited another ignorance.
So, please do not be baffled that the SRC suspended two officers( THEY WERE NOT HEARD) for an allegation they have not been equally found guilty, except if there is a ‘new’ part of the Constitution that recommend trial in absentia.
Yes! they sent us a letter of summon, to which the CEC replied as early as possible, stating clearly that the CEC will not be available, which was, obviously, due to the ENGINE PICNIC preparations, which is tied to the welfare of the members of the faculty. We had a change of venue and we were busy on our side trying to make all ends meet and ensure the success of the event.
As affirmed earlier, please do not be baffled that after our defense and the letter of absence, the house still claimed that the members of ‘THE CENTRAL EXECUTIVE COUNCIL’ failed to appear on the floor of the house for no cogent reason…”. Is  the preparation for the Picnic not cogent enough? Is the SRC much more important than the members of the Society?
However, Since the SRC did not deem it fit enough to hear the CEC’s defense of the SRC’s purported allegations, we shall shed more light on these issues and further state our position.

ALLEGATIONS AGAINST THE PRESIDENT, Comrade FOCUS
1). Representing this association at the Engineering Summit weeks ago without notifying the SRC…
Though we did not receive any letter, addressed to the President, NUESA UNILORIN, from the Engineering Students Association of Lagos State University, inviting us to the Engineering Summit 1. 0. But, In conformity with Article 3 of the Constitution, Aims and Objectives of the Association, section iv, which states that ‘to associate the students of engineering and technology UNILORIN with other engineering bodies within and outside the country…’ Comrade FOCUS, after meeting with the other executives sent a directive to all departmental bodies to know if their students were interested in the Summit of which most of their responses were positive. Since the Association was not officially invited, we decided to go individually as  faculty members. Letter of notifications and approval were sent to the Vice Chancellor, the Dean of the faculty and lecturers of the faculty. However, in line with Article 6, Section 1, subsection iii, which states that the President and his nominees shall represent the association in external meetings, which obviously didn’t necessarily warrant the notification of the SRC, the President and his nominees, including the Students Union President and 5 departmental Presidents, ably represented the faculty upon the approval of the Vice Chancellor and the Faculty management at the Summit in LASU and a bus was given by the VC for the trip through the intervention and the interest of the SU President and his Ass. General Secretary. And because the trip was not sponsored and geared by the Association, an individual was made responsible for the finances of the trip and not NUESA if that was the erroneous thinking of the SRC.
2.  Setting up the EPEX Planning Committee without the ratification of the SRC…
About the EPEX committee, I will like to remind Mr. Speaker during our business sitting, the acclaimed EPEX committee was explained by the President, Comr. Focus that, these set of people are neither Standing Committee stated in the constitution nor Ad hoc committee and it was clearly stated at the floor of the house then that people working towards the success of EPEX 2018 is a voluntary team that wish to put in their best in achieving this aim. We will also like to bring to the notice of Mr. Speaker and the honourable house that, EPEX 2018 is a second semester program and the names of the set of committee that will work on EPEX and take over from this present group of people were agreed to be nominated by both arms of the Association.
But it is so saddened , up to this moment we have not received any nominees to be part of the committee from the SRC as agreed upon and they expect us to hold EPEX 2018 next semester.
Also, on the issue of the committee requested to be dissolved, I can say this is as a result of lack of confidence by the Speaker because two judgements were made that day;
1. That the house will send names of committee members in addition to those that would be suggested by the CEC for due ratification. And while we were still working on some names of interested people to be part of the committee and send it to the house, they passed their judgement without fair hearing from the CEC.
2. That the committee should be dissolved as a NUESA EPEX Committee which was explained often clearly that, they were neither a Standing Committee nor an Ad hoc committee but  rather a team that the expected constituted committee will take over from.
In addition to that, the current team working on EPEX has been the one in charge of all the responsibilities of the EPEX 2018 both financially and workmanship and not NUESA.
ALLEGATIONS AGAINST THE PUBLIC RELATIONS OFFICER, Comrade INTELLECT

1.) Setting up the Association’s Editorial Board without the ratification of the SRC…
The constitution is what binds us all, and it’s supremacy must be respected at all times! The NUESA Editorial Board has been established and has swung into action before the inauguration of the SRC, reason being to reduce the workload on the members who are working selflessly in the faculty’s interest during the second semester. And ever Since the establishment of this board, they have been putting in their best, even to the extent of traveling down to Lagos to interview  eminent personalities in the Engineering realm. The constitution clearly gave rulings on the establishment of any committee, including the Editorial Committee , which we are really aware of.
In the Constitution Appendix, Section B, Subsection 2, it is clearly stated that At any meeting of the SRC or CEC, the Executive President shall have powers to rule on any matter upon which this constitution is silent and obtain retrospective approval of the SRC , but since the house has not been constituted then, the President acted upon the backing of this aspect of the constitution, since the constitution is silent about the creation of an emergency committee before the inauguration of the SRC, and he directed the PRO, in line with Article 6, Section 6, subsection V, to create the NUESA Editorial Board. this  is the main reason why we named it the Editorial Board and not the Editorial Committee. And we concluded to forward the names of the nominees for the Editorial Committee to the SRC for due ratification once the already established Board completes the first phase of their objectives, so as to ensure a smooth transition to the ratified committee and not render the efforts of the Editorial Board so far fruitless. The list of names of the nominees for the Editorial Committee has almost reached completion and shall be forwarded to the SRC for ratification as soon as possible.
Having cleared the air, the competency and capability of the Speaker of the house should be put to test.This arguable resolution of the SRC to incriminate and soil the reputation of the NUESA CEC based on mere speculations and unconfirmed allegations is highly incongruous and needs the intervention of all concerned stakeholders. Suspending the President and the PRO without proper investigations and considering the alleged persons defense inconsequential, this is clearly a handiwork of an Inexperienced SRC engaging in a negative power tussle.
Therefore, the CEC of the NUESA plainly, with no string attached, refuse the suspension of the officers as the SRC conclusions lack confidence and experience. We do hope the SRC will realize it’s mistake soon and retract her resolutions, and also apologize to the general public for misleading them.
Our determination to reform the Faculty of Engineering remains unstoppable, and we shall resume our respective offices tomorrow to ensure the smooth running of the association. NUESA Must Not Suffer from an Inexperienced SRC. 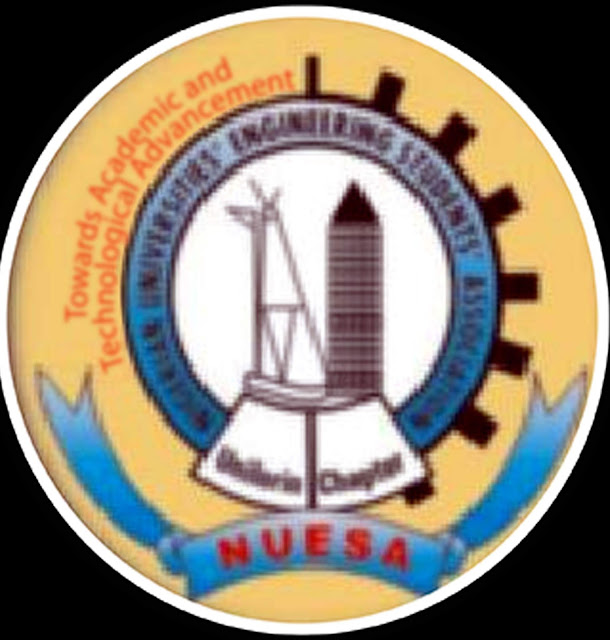