As swiftly as it could take, the students union of university of Ilorin has directed all the students in the University to hold on with the payment of the increased fees. This directive is coming almost tree hours after the Union’s president, Comr. Animashun announced via his Twitter handle a meeting with all the faculty presidents would be held to ratify a consensus decision, and that afterwards a meeting with the management would be held.

In a press statement released moment ago by the Union signed by the Union’s PRO, Mr Issa Uthman Analyzer, the Union states that students should not pay until an action is taken regarding the increment.

Although no official communication has been established about the SU-Management meeting, but things look ‘Not-so-good’.

ON THE OUTRAGEOUS INCREMENTS IN SCHOOL FEES

I am compelled beyond reasonable doubt to speak out and take a stand against what could be described as attack on our common sense and right to due consideration in all matters that touches on our well-being and welfare as students of this great institution.

Our tolerance level was punched and almost taken for granted by recent release of school fees for 2018/2019 academic session. The increment ranges from 10000 to 17500 depending on programme/faculty. It  is not only outrageous but absurd given the present economic situation of this country.

Many are self sponsored while majority of us are from parents in States where salaries are not paid either regularly or at all for months!
Where then are we expected to get the fees from? At what time are we suppose to adjust our budget for the session? Who is to pay for us? are questions bothering my mind. In simple term, I consider it as April fool and the University authority should be commended for millennium joke. We shall resist this to get reasonable concession.

Of course,  we are stakeholders with strong belief in the University dream. The VC and his team should know better that our sacrifices should be rewarded rather than increasing the suffering packages we have endured for long. Currently, the SU Officials are working hand in hand with the faculty presidents to analyse the situation and make a comprehensive plan.

Hence, NO STUDENTS SHOULD PAY! We shall call for meeting with the  management for intellectual discourse.
We are not rascals but our approach shall be that of radical and sound minded fellows. We shall seek peace in resolving matter.

Members of our great Union should remain calm till you hear from us. I can confidently affirm that Aluta Continua, Victory Ascerta

We shall invest in our people by resisting this hike in fees doggedly, 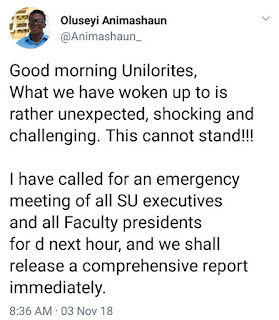 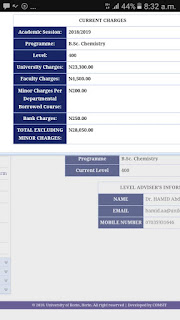 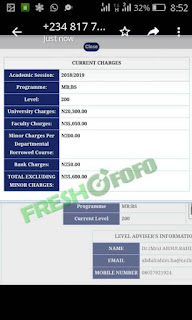