The Senate council of the Unilorin students’ union will on November 2018 hold a 3-day summit,  themed: “Students Parliamentary Summit”

Standing before the Senate , the committee chairperson  on the proposed summit who also doubles as the deputy Senate President, Miss Mustopha Toheebat stated that the Summit is a 3-day programme starting from the 1st of November through the 3rd day of November. The programme, according to her is aimed at equipping the Senate council members with the leadership skills in order to maximise their potentials.

In a telephone conversation this morning, the clerk of the house, Miss Morenikeji, 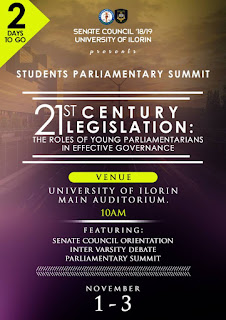 disclosed that the guest speakers expected for the programme are members of the Kwara state House of Assembly as well as the  National Assembly. She further said students from some other Nigerian Universities are also being expected at the summit.

The Clerk highlighted the order of the programme thus: On the first day of the programme, orientation for the Senate council will hold; the second day is earmarked for launching of the Union’s Android App and the third day is slated for inter-University debate.