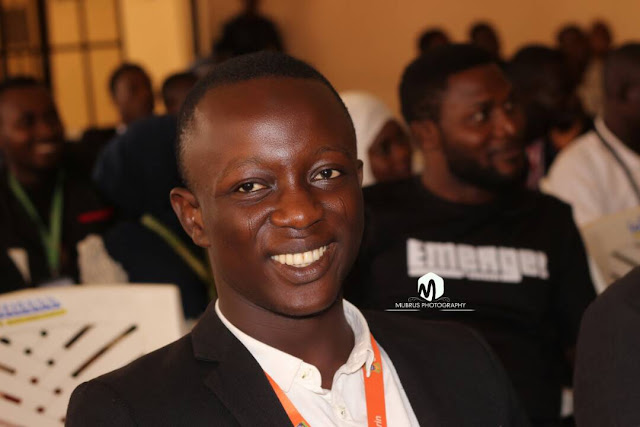 Unilorin SU President, 2017/2018 Session.
What do you really know about the current President of the Better-by-Far Student Union in Nigeria, Reedof?
Most students in Unilorin perceive him as a unique grammarian, man of honour, team-player, servant-leader, loyal friend, and fearless comrade.
Others see him as temperamental, subtly autocratic, workaholic, and shy.
That’s because, Reedof means different things to different people!
Here are 15 things you probably didn’t know about him:
1. He is ‘plus-one’ today. As regards his actual age, it remains concealed for obvious reason o, don’t ask me why, biko. If you know, you know!
2. His full name is ADEBISI Ridwan Abimbola, also known as REEDOF.
3. He’s an ‘engine-boy’ and a final year student of the department of Civil Engineering, Faculty of Engineering, University of Ilorin.
4. He’s a native of Osogbo; the capital city of Osun State, Nigeria. Two fingers in the air for the Omoluabis in the house!
5. He attended Aromolaran Memorial Comprehensive College and Fakunle Comprehensive High School; all in Osogbo, Osun State.
Like seriously?
6. Now here’s the tonic aspect of his persona; he’s currently in a serious relationship with Miss Biola, a ***student of the University of Ilorin. Her department is ****, don’t ask for more o, biko.
In any case, the good news is, he’s a Muslim. And therefore, his romantic social network base may still be available for the Reedof-hopefuls.
7. He’s definitely not a greenhorn in the business of leadership. This dude has served in several leadership positions such as:
a. ONSU Chief Whip 13/14;
b. ONSU Welfare Secretary 14/15;
c. NAOSS PRO 2 15/16;
d. NICESA National conference Organizing Secretary 15/16;
e. ONSU National headquarters Electoral Secretary; and
f. the current SU President, UNILORIN.
Omo mehn, no be small thing o. Indeed, leadership comes from good follwership.

8. His hobbies are speaking, learning and reading. Can you imagine! Was thinking he’d say my hobby is taking bae to the movies and stuffs like that… Don’t mind me jhare, our President is truly an intellectual!

9. What’s more? His favourite food is rice and beans. Yes! Rice and beans, especially that kind of combo you get at any SU buka. Now you know why this charismatic leader is so cerebral and energetic. No wahala na, rice and beans all the way!
10. Blue, is his favourite colour. My, o my! You share the same colour with me, Mr President.
11. His favourite quote is: “Where there’s a will, there’s a way.” Does the slogan, “Together-We-Can” rings a bell?
12. He nurses the political ambition of becoming the Governor of Osun State in future.
Wow! That’s such a big dream. But then, it’s definitely achievable. Good luck, Reedof!
13. His happiest moment was the day he was declared President of Unilorin Student Union.
Wait a minute, who wouldn’t be happy being 001 of the most sought-after university in Nigeria? In fact, the feeling is inexplicable!
14. However, the saddest day of his life was when he lost his younger sister to the cold hands of death. May her gentle soul continue to rest in peace. Amen.
15. And finally, his role model is one of Nigeria’s controversial Senators, Sen. Shehu Sanni. On the other hand, Ogbeni Rauf Aregbesola is his mentor.
What a combo! Engine boys know better.
So, on a special day like this, being his ‘plus-one’ birthday, Mr. President wishes to say this to the entire students of the University of Ilorin:
“The innumerable, relentless and unshakable support received from fellow unilorites over the days can never be overemphasized. So, I sincerely appreciate you all and hope for a better synergy for the achievement of a better Union.” — Reedof.
There you have it! 15 things you probably didn’t know about the current vibrant, and comrade Executive President of Unilorin Student Union.
Happy birthday, Mr. President!
Compiled by:
OSUJI, Chima Francis
UCJ, UNILORIN.
Tags: Unilorin Dailies