Three Unilorites coveted the winning prizes has emerged winners at the just concluded beauty contest last sunday tagged “Miss Asa Kwara 2018” where.
The event which took place at the Kwara state banquet hall as organized by Unfolding Trends Corporation featured many royalties from different parts of Kwara in attendance where Miss Omolewa Akinseye of faculty of Law, University of Ilorin  emerged as the Miss Asa Kwara 2018.
The first and second runners up were Miss Onu Joy Ene and Oluwadasolami Elugoke both of the Faculty of Arts and Vetinary Medicine respectively.
The event saw a performance by Orezi, a popular Nigerian hip hop artiste who entertained the audience with his thrilling musical performance.
Also, Mr. Bolaji Amusan, a popular Yoruba Nollywood actor known as Mr. Latin, kept the audience entertained as he comically anchored the event in company of “Opebe” and Omidan Olayinka a popular radio presenter in Kwara.
While explaining the rationale behind the contest and why it is culture (“Asa”) centric, the convener and CEO of Unfolding Trends Mr. Afolabi Qudus said “Miss Asa Kwara 2018 aims at creating social solidarity and cohesion, fostering social inclusion, community empowerment, and capacity building.”
The contest on the whole had 13 contestants from different parts and institutions within the state. Some of the royal fathers that were in attendance the Olusin of isanlu- isin, Oba Agbeku, Oloreke of Oreke, Alamodu of Amodu, Alamoyo of amoyo and the Olojoku of ojoku. 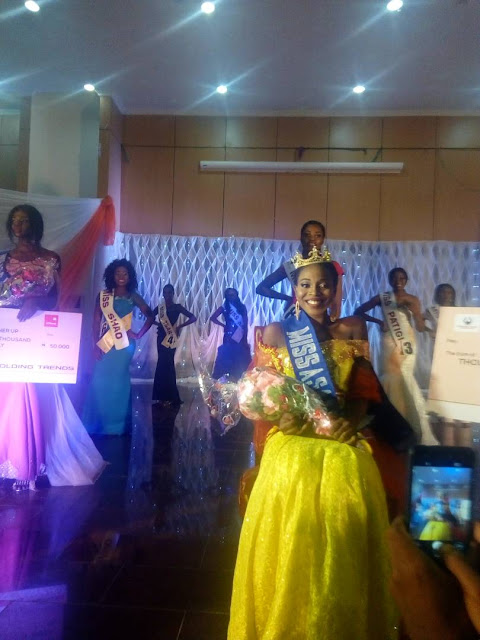