The United States has its first government shutdown in nearly five years after senators failed to reach a deal to keep the lights on.
An effort by Republicans to keep the government open for one month was rejected in a vote on Friday night after they failed to address Democratic concerns about young undocumented immigrants known as Dreamers. Republicans needed 60 votes to advance the bill but the legislation only received the support of 50 senators.
The deadline came and went without a deal, causing funding for the federal government to lapse. Federal agencies will now be unable to continue operating and hundreds of thousands of “non-essential” federal employees will be put on temporary unpaid leave.
Democrats earlier blamed Republican divisions for the failure of the vote. Senator Ron Wyden, a Democrat from Oregon, said lawmakers from his rival party were not on the same page as president Donald Trump.
Meanwhile, Trump blamed Democrats for the shutdown: “Not looking good for our great Military or Safety & Security on the very dangerous Southern Border. Dems want a Shutdown in order to help diminish the great success of the Tax Cuts, and what they are doing for our booming economy.” 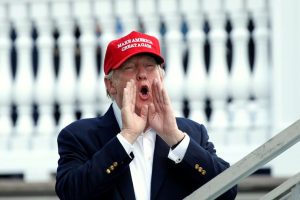